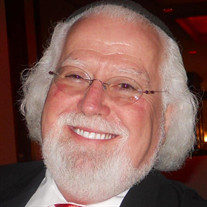 Messianic Rabbi Moshe Gilboa Laurie, 76, passed into eternal life into the arms of his heavenly Father and Jewish Messiah on Monday, November 16, 2020. He had been a resident of Memphis, TN, for less than a week when he died suddenly, although he had suffered from vascular dementia for several years. He was born Morris Gilbert Laurie on March 23, 1944, in Brooklyn, NY, to Max and Dotty (Bohrer) Laurie. (Called Gil, he later legally changed his name to his Hebrew name.) Having learned of the persecution of his Jewish people, at the age of nine he resolved to become a warrior of David. A champion fencer in high school, he joined the U.S. Marine Corps and was an excellent marksman. He served Israeli intelligence and then moved to Israel, serving in the National Police and in the IDF as Assistant Commander of the Sniper School. He was the first breeder of Saint Bernard dogs in Israel. If he had been a dog, he would have been a Saint Bernard: massive, strong, friendly and loving. In 1982, in Las Cruces, NM, God spoke to him audibly “You can serve the Father through me, for I have come in his stead,” and he knew that Jesus was the Messiah. Sid Roth covered his testimony on Christian television on “It’s Supernatural.” “The Coral Ridge Hour” also featured him. Both programs may be viewed on the Internet. In 1998 he was called to Groton, CT, and established Congregation Shofar Be Tzion, a Messianic Jewish Congregation. It was in Groton that he married Dr. Martha Schulz Hendrick on February 23, 2002. She was his “Bride,” his constant companion and later his caregiver. He ministered both nationally and internationally. His TV program, “Spiritual Warfare,” was sponsored and produced by TCT Christian Television; it gained a large following both nationally and internationally. The Holy Spirit prompted them to move to Marion, IL, in 2007, and inspired by their time ministering in Britain, they named their new home Beth Ariel. (House of the Lion of God) Shortly after they arrived, they discovered a Messianic Jewish Congregation, Congregation Adat Ariel, where Larry Mullinix had been praying for Rabbi Laurie to come to Marion. Rabbi Laurie’s teachings on Spiritual Warfare have been published in a book, “Joining God’s Army: Instructions from a Warrior of David.” He was ordained as a minister under Kingsway International Fellowship since 2002. After his show on TCT ended, he had a local radio program, “Truth in Life,” with his wife and Chuck and Debra Nelson. This transitioned to a weekly Livestream broadcast. His wife, Martha Schulz Laurie of Memphis, TN, survives him. Before his salvation, he had a series of failed marriages and six children. He would joke that he needed to set up a spreadsheet to track who was talking to him and who was not. There was great joy when someone moved to the “talking “ column. His children and their spouses are Tanja Ashlin of Connecticut, Michael (Angela) Laurie of Floral Park, NY, Dawn Laurie of San Rafael, CA, Dafna Laurie (Fredrick Buch) of Altadena, CA, Rachel Laurie of Israel and Nimrod Luria of Israel; grandchildren Brett (Ani) Laurie of Portage, IN, Dana Laurie of Florida, Leslie Laurie of Washington, DC, Tyler Ashlin of Virginia, Donovan Singh of Floral Park, NY, Shira, Or and Tamir Luria of Israel, and Atlas Laurie-Buch of Altadena, CA; one great-granddaughter, Ariella Laurie; stepson, Lee (Stephanie) Hendrick of Encinitas, CA; brother-in law Lee (Patsy)Schulz and sister-in-law Gin Eichholz of Memphis; a very special sister-in-the-Lord, Toni Hurshman of New London, CT; and his Westie dog, John Wayne. His parents, a sister, Helen India Rosen and a brother, Frank India predeceased him. The ashes of his beloved Saint Bernard, Max (Diamond’s Ariel Maximus) will be interred with him. A socially distant visitation will be held at Memphis Memorial Park Funeral Home at 1:00 pm on Monday, November 23. Services will be in the chapel at 2:00 pm, conducted by Pastor Larry Mullinix and Messianic Rabbi Vernon Bell of Congregation Adat Ariel. The services will be on Livestream via a link on the Funeral Home website and archived for 90 days. Because of the Coronavirus, virtual attendance is recommended. Those who are local may join us graveside at Memphis Memorial Park following the service. Memorial donations may be made to Congregation Adat Ariel, 1301 Enterprise Way, Suite 63, Marion, IL, 62959. For those who are unable to attend the service please click and follow the link. http://webcast.funeralvue.com/events/viewer/41267https://www.tributeslide https://www.tributeslides.com/tributes/show/9W324YL4F87CP34C

Messianic Rabbi Moshe Gilboa Laurie, 76, passed into eternal life into the arms of his heavenly Father and Jewish Messiah on Monday, November 16, 2020. He had been a resident of Memphis, TN, for less than a week when he died suddenly, although... View Obituary & Service Information

The family of Moshe Laurie created this Life Tributes page to make it easy to share your memories.

Send flowers to the Laurie family.