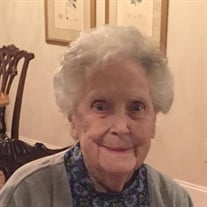 Mildred ”Millie” Broome Verner,88, passed away on Wednesday, August 26, 2020, at St Francis Hospital in Bartlett. Born in Memphis on August 31, 1931, she was the eldest child of Margaret Stevens and James Rice Broome. She had a special connection with her grandparents, Edith and James Henry Broome, and her aunt “Mil-Mil” for whom she was named. She was a 12 year student at Treadwell in Memphis, in spite of spending nearly a year in Albany, California. She remembered that year with pleasure all her life, for the friends that she made and for the chance to take trumpet lessons in San Francisco. She loved the trumpet and one of her proudest moments was winning first chair at the West Tennessee band competition over the CBC trumpeter, who was chagrined by the loss to a girl. She attended Memphis State University where she studied music and was president of her sorority, Alpha Xi Delta. She met her future husband, Buck Verner, in college where they both played in a jazz quartet. Millie had a fine sense of humor, never taking herself too seriously. Her positive attitude was evident all her life. Never a complainer, always pleased and appreciative of all that came her way, she took life’s occasional tragedies in stride, and kept smiling. She loved her friends, road trips, and little ones. Millie was preceded in death by her husband of sixty-four years, Dr. Walter Eugene “Buck” Verner. She is survived by her mother, Margaret Broome, 108; her daughter Carol and son-in-law Dennis Craig; son Paul Verner; son Tim Verner and daughter-in-law Kathy; and son-in-law Larry Wells. She was predeceased by her daughter Susan Wells. Millie is survived by her sister Jane and her husband Dennis Podielsky. She was preceded in death by her sister, Sue Henry. She is also survived by her grandchildren Camp Craig and wife Virginia, Jamie Wells, Taylor Verner, Nick Verner, and predeceased by granddaughter Mary Stevens Craig. Her great-grandchildren Caroline, Campbell, and Catherine Craig also survive her, as well as many loved nieces and nephews. The family would like to offer special thanks to the staff at Kings Daughters and Sons Home who cared for her so well, and for the compassion and care she was shown during her illness at both Methodist North and St. Francis Bartlett Hospitals. A graveside service will be held at Memorial Park Funeral Home and Cemetery on Monday, August 31, 2020 at 1:00 PM.

The family of Mildred B. Verner created this Life Tributes page to make it easy to share your memories.

Send flowers to the Verner family.