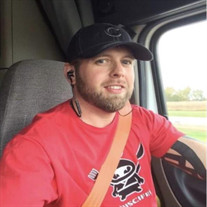 Michael Stephen Leech, Jr., 45, of Derby, KS, passed away on March 8, 2021. “Stephen” was born on August 11, 1975 to Donna Mabry Leech and Michael Stephen Leech, Sr. in Memphis, TN. He graduated from Bartlett High School in 1993. Stephen was a professional truck driver for Metro Express out of Wichita, KS at the time of his passing. He was a talented guitar player since the age of 12 and a creative artist. He was a passionate fan of the New Orleans Saints and the Nashville Predators. On his many trips across the country, he loved to take beautiful pictures of sunsets and then share them with family and friends. Stephen had such a kind heart and always looked forward to his Thanksgiving visits to Memphis. He would also surprise us when his routes would take him close to our area. Stephen settled in Derby, KS because he met and fell in love with Shara Cynova. Shara and her children would also come on the Thanksgiving visits and we came to love them just as Stephen did. While living in Kansas, Stephen became interested in starting a vegetable garden. As it turned out, he really had a green thumb and with the help of Shara and Elijah doing the watering while he was on the road, they would always end up with a great harvest. Stephen was very proud of his vegetable garden and he would send pictures to the Memphis family. In addition to his parents, Stephen is survived his brother, Ryan Leech (Heather), his sister, Rebecca Lane (Daniel) and his nieces and nephews, Culligan, Bryanna, Bailey, Will and Luke. Also, Shara, his loving girlfriend, and her four children, Stephanie, Heather, Katelin and Elijah, Shara’s mother, Kay Thomas and Shara’s granddaughter, Alona. In lieu of flowers, the family asks that donations be sent to St Jude at 501 St. Jude Place, Memphis, TN 38105. (In memory of Stephen Leech for Melissa Mabry.)

The family of Michael Stephen Leech created this Life Tributes page to make it easy to share your memories.

Send flowers to the Leech family.