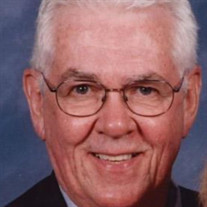 Michael Forrest Dalton, Sr., aged 87, passed away on March 15th at Methodist Hospital in Germantown, Tn. Mike was a lifelong Memphian, a devout Catholic, a devoted husband, father, step-father, and grandfather. He was preceded in death by his parents, John and Annie Pierotti Dalton, sister Rita Catherine Dalton and brothers John Dalton Jr. Anthony J. Dalton and Enrico Dalton. Mike attended Little Flower Elementary School, Christian Brothers High School, Memphis State University and Southern Law School. He proudly served his country in the US Army during the Korean War. Mike was always industrious, working even before his teenage years and then throughout his adult life. He began his career with the Shelby County Tax Assessor’s office and later worked for Memphis Housing and Urban Development for 25 years before becoming an independent real estate appraiser. Upon retirement he took great pleasure in his volunteer work, serving in several capacities at his church and at Habitat for Humanity of Greater Memphis. He valued his Catholic faith and the love of his family, took pride in his hometown of Memphis and the Memphis Tigers. He cherished the friends and memories he made throughout his life. He will be greatly missed by his loving wife of 39 years, Jane Dalton, his children, Michael Dalton, Jr. and Liz Dalton Miller (Mark), step-daughters Cara Wright and Jayna Wright Shelton (David) of Mesa Arizona and his grandchildren, Abigail and Jesse Dalton, Cody and Dalton Miller. The funeral will be held at Holy Spirit Catholic Church at 2300 Hickory Crest Drive at 11:00 on Monday, March 21st with visitation from 10:00 – 11:00. Interment will take place at Memorial Park Cemetery, 5668 Poplar Ave. following the service. Mike would be grateful for any memorials being sent to St. Jude’s hospital, a charity he supported for many years.

Michael Forrest Dalton, Sr., aged 87, passed away on March 15th at Methodist Hospital in Germantown, Tn. Mike was a lifelong Memphian, a devout Catholic, a devoted husband, father, step-father, and grandfather. He was preceded in death by... View Obituary & Service Information

The family of Michael Forrest Dalton, Sr. created this Life Tributes page to make it easy to share your memories.

Send flowers to the Dalton, family.