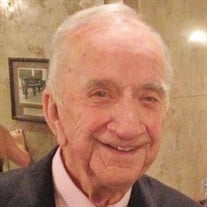 There are no words to express the sorrow with which we announce the death of our beloved Maurice Joseph Walker, 89. He was known to his friends and family as Moe, and his life was one filled with honor, faith and love. Moe was born in Kent, Ohio to Joseph William Walker and Elizabeth Eusebius (Nelson) Walker in 1931. The family soon moved to Meadville, PA, where Moe grew up with his three beloved sisters, Sally, Evelyn and Jo Ann. An avid Yankees fan, Moe would often tell of, as a young man, riding the train from Meadville to New York City to see a game and returning home the same night. Moe graduated from St. Bonaventure University in June 1953 with a degree in Philosophy. He enlisted in the Air Force shortly after graduation, and served as Chief of the Maintenance Section for the 55th Air Transport Squadron at Travis Air Force Base, California. Moe was named Outstanding Airman for the 55th Air Transport Squadron and received the National Defense Service Medal. Returning to Meadville following his service, Moe worked as an engineer at Talon Zipper Company. It was in Meadville that Moe met the beautiful Louise Ann De Loss, a nursing student, and the two married on May 3, 1958. The couple raised four children and celebrated 62 years of marriage in 2020. Moe spent the bulk of his career in manufacturing and consulting. Following his tenure at Talon, Moe worked with the global consulting firms Dickinson-Allen and Arthur Young, and as a Vice President of Booz, Allen and Hamilton. He later joined the executive leadership teams at Gould, Inc. and Hoover Universal / Johnson Controls. Moe returned to consulting, advising many Fortune 500 companies while at Arthur Andersen and Coopers and Lybrand. It was the C&L job that brought Moe and Lou to Houston, where he was instrumental in the growth of the Houston Shakespeare Festival, first as board member and then as the organization’s president. Moe’s final corporate job was also in Houston, as president of a fledgling DNA sequencing firm, Lark Sequencing Technologies. After leading the charge to take Lark public on NASDAQ, Moe retired and he and Lou moved to Corpus Christi, TX. Settling on North Padre Island, they met many new friends and enjoyed a robust social life. Moe wasn’t quite done working, however. His final job was as director of the Padre Island Homeowner’s Association, where he enjoyed helping grow the services provided by the association as well as representing the Island and its residents. After 15 years on the Island (and one too many hurricanes), the Walkers moved to Memphis, TN in 2011 to be closer to family. Moe is survived by his loving wife, Lou; his sisters Evelyn Lawrence and Jo Ann Kottler; his children, Amy Soik (Eric), Suesie Toole (Rick), Michael Walker (Mary Margaret) and Sally Walker Davies; and grandchildren James Davies and Madeline Davies, Joe Soik and Abby Soik, Shannon Toole LeBlanc (Daniel), Ryan Toole (Brianna), and Kendall Toole; and Lily Walker and Molly Walker. Moe was also proud to be a great-grandfather to Ellie and Oliver LeBlanc and Brewer Toole. A date for a memorial service and celebration of Moe’s life will be announced when it is safe for family and friends to gather again. Memorial contributions may be made to St. Bonaventure University, P.O. Box 2519, St. Bonaventure, NY 14778, or online at sbu.edu.

There are no words to express the sorrow with which we announce the death of our beloved Maurice Joseph Walker, 89. He was known to his friends and family as Moe, and his life was one filled with honor, faith and love. Moe was born in Kent,... View Obituary & Service Information

The family of Maurice Joseph Walker created this Life Tributes page to make it easy to share your memories.

There are no words to express the sorrow with which we announce...

Send flowers to the Walker family.