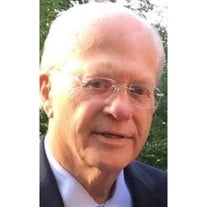 Maurice B. Landers, III, MD, an ophthalmologist and pioneer in the treatment of vitreoretinal diseases and mentor to scores of leading ophthalmologists across the country and globally in a career spanning over 58 years, passed away on July 11, 2021, in Memphis Tennessee. He died peacefully following a period of illness, in the loving presence of his wife and 3 children. Dr. Maurice (Reece) Landers was born in Detroit, Michigan on December 19,1937 to Maurice B Landers Jr, MD, and Virginia Voll Landers. The oldest of three brothers, he was raised in Ventura, California and received a B.A. from Princeton, in 1960. Reece Landers graduated from the University of Michigan Medical School in 1963. He attended Oxford University for a one year externship and completed his Ophthalmology Residency at the Jules Stein Eye Institute, UCLA in 1967. Reece Landers served in the U.S. Army from 1967 to 1969, achieving the rank of Major, serving in the Office of the Surgeon General in Washington, DC and at the Frankfort Arsenal in Philadelphia, PA where he was Director of the U.S. Army Medical Research Laboratory conducting early research on lasers. After the Army, he joined the faculty of the Duke University Eye Center in Durham, North Carolina in 1969. He was instrumental in building the nationally renowned vitreoretinal practice at Duke and was an innovator in treating diabetic retinopathy. From 1976 to 1984. Dr. Landers was Professor of Ophthalmology and Chief of the Retina Service at the Duke University Eye Center. He later served as Professor of Ophthalmology and Chief of the Retina Services at the University of California, Davis Medical School in Sacramento, CA, practiced privately in Memphis, TN, Virginia Beach, VA and Houston, TX before returning to North Carolina as Professor of Ophthalmology at the Kittner Eye Center at UNC-Chapel Hill from 2001 until his retirement in late 2019. Over the course of his career, Reece Landers authored or co-authored several hundred peer reviewed articles on the treatment of retinal disease and was responsible for numerous technical advances in vitreoretinal surgical techniques. At Ventura High School, Reece (Mac) Landers was the captain of his basketball team, a starting right fielder of the varsity baseball team, and Prom King. He was also on the basketball team at Princeton University and remained an avid basketball fan throughout his life. His life experiences led Reece Landers to live in 8 states, and as a seasoned international traveler visited over 30 countries. In his retirement Reece Landers enjoyed life at his home on a lake in Lakeland, TN, where he could pilot his own pontoon boat across the water, and drive his golf cart around his property, which was styled with racing decals and #43 in honor of Reece Landers’ favorite NASCAR driver, Richard Petty. Reece was well known for his engaging curiosity, and he loved communicating with family and friends, sharing thoughts on almost any subject from prehistory to the latest technological advances, from the smallest atom to the galaxies of the universe. There were few subjects he was not knowledgeable about and eager to discuss. Dr. Reece Landers is survived by his wife, Wendy Marbury of Lakeland, TN, his three children, David Landers (Kara), Kathleen Landers (Alan Denniston) and Diana Landers (Bill Hodge) and five grandchildren: Douglas Landers, Irene Denniston, Virginia Landers, Shannon Landers and Vivien Denniston, His brother Stephen Landers (Jennie) and nieces Katherine Landers, Karen Landers and Megan Landers. He will be deeply missed. A Celebration of Life Visitation will be held at 1:30pm (CST) Saturday, July 17 at the Memorial Park Funeral Home & Cemetery, 5668 Poplar Avenue, Memphis, TN. A Celebration of Life Service will immediately follow at 2:30pm (CST). A virtual webcast of the service and a page for posting memories of Reece will be available at https://www.memorialparkfuneralandcemetery.com/ In lieu of flowers, donations can be made in memory of Dr. Reece Landers to the Foundation for the American Society of Retina Specialists at https://www.asrs.org/foundation/donate-now To view the service online for Dr. Landers click the link below. http://webcast.funeralvue.com/events/viewer/57025/hash:ED828DA54933F18C

Maurice B. Landers, III, MD, an ophthalmologist and pioneer in the treatment of vitreoretinal diseases and mentor to scores of leading ophthalmologists across the country and globally in a career spanning over 58 years, passed away on July 11,... View Obituary & Service Information

The family of Maurice B. Landers III, MD created this Life Tributes page to make it easy to share your memories.

Maurice B. Landers, III, MD, an ophthalmologist and pioneer in...