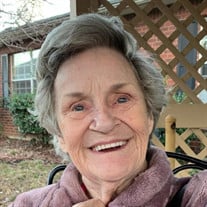 On Tuesday, March 10, 2020, Mary Clark, faithful sister, daughter, friend, and mother, passed away at age 77. Mary was born the second of three children to Iola and Edmund Gillooley in Chicago, Illinois. She enjoyed a varied career, starting as a switchboard operator, and working her way up to managing rental and commercial properties, becoming the assistant director of a census bureau, and becoming the comptroller of a non-partisan think tank. From Chicago to Honolulu to Omaha to San Francisco, Mary lived with a sense of freedom and fearless adventure that often inspired others to dream big, too. Raised Roman Catholic, Mary re-discovered the look and feel and faith of her childhood in 1996, and soon became an Orthodox Christian. She fell in love with the city of Memphis and the community of St John’s more than twenty years ago; here, Mary found a forever home along the joy of eternal friends. More than anything, and without ceasing, Mary loved to laugh with family and friends. May her memory be eternal! Mary was preceded in death by both her parents and by her two sons, Larry Marsin and Michael Marsin. She is survived by her siblings Edmond Gillooley and Betty Bragg, by her daughter, Isak Griffiths, and her dearest friends, Suzan and Brent David. A celebration of her life will be held in Memphis at St John Orthodox Church on Tutwiler at 11 a.m. on Friday, March 13, 2020; visitation will be immediately before the service, available from 10 a.m. In lieu of gifts or flowers, Mary would appreciate gifts in her name to St John Orthodox Church in Memphis, or to St Paul Skete in Grand Junction, Tennessee. Thank you.

The family of Mary Clark created this Life Tributes page to make it easy to share your memories.

Send flowers to the Clark family.