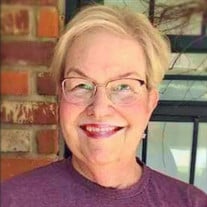 Martha Lindley Conrad Bartz, 69, of Memphis, Tennessee, formerly of Searcy, Arkansas, passed away on Tuesday, June 15, 2021. She was born in Jonesboro, Arkansas, on February 5, 1952 to the late Wayne Lamar Lindley and Elmarie Carey Lindley. Martha was preceded in death by her husband of 25 years, Larry William Conrad. She is survived by her husband of 18 years, Roger Erwin Bartz. She leaves her daughter, Natalie Conrad Martin (Richard) of Memphis, and her son, Sean William Conrad (Lee) of Little Rock, and four beloved grandchildren: Madeline Marie Martin, Annabelle Brooke Conrad, Kit William Conrad, and Lindley Jane Conrad. She also leaves behind loved ones Linda Koenig, Leigh Lindley Martin, Laine Lindley Byrd, Linda Wiseman and family, Donna Bartz, Lindsay Lindley Thomas, Wayne Lamar Lindley, III and her brother, Wayne Lamar Lindley, Jr. Additionally she left and loved her cousins Paul Murray (Bean), Scott Atkinson. A 1970 graduate of Jonesboro High School, Martha attended Arkansas State University where she majored in art, was an active member of Chi Omega sorority, and graduated in 1974. There, she met her husband Larry Conrad, whom she married in 1974. Martha spent many years attending Our Shepherd Lutheran Church in Searcy before moving to Memphis to be closer to her daughter, where she attended Christ the King Lutheran Church. “Mimi” loved spending time with her grandchildren and enjoyed bragging about all four of them. Martha’s life work was teaching art to young people for 27 years, in various public schools in Arkansas, where she was loved by her students and coworkers. She was an accomplished artist throughout her 69 years; her works of art are some of her best legacies, have been shown throughout the state, and are among the most cherished possessions of her family and friends. She saw beauty in everything around her. Martha was the recipient of two life saving bone marrow transplants. The second, donated by her “angel” Evan C., and overseen by Dr. Sproat at Mayo Clinic in Scottsdale, Arizona, gave her five additional years on earth. The family would like to express their utmost thanks and gratitude to these individuals and the medical professionals that surround them. In those five years, Martha saw two grandchildren born, while continuing to nurture her family and create artwork. She remained a friend, artist and inspiration until her final days. Martha’s strong, unshakable faith in God and her daily devotion to her personal words of wisdom, ‘Be Happy And Pray’ led her on a life’s journey of beauty and strength during challenges. She was a friend to everyone she met, with a quick smile and a great sense of humor. A celebration of life will be held Thursday, June 24, 2021 at Christ the King Lutheran Church, 5296 Park Avenue, Memphis, TN 38119 at 2:00 p.m. In lieu of flowers, the family asks that donations be made to Christ the King Lutheran School, 5296 Park Avenue, Memphis, TN 38119 OR Arkansas Children’s Hospital.

The family of Martha Lindley Conrad Bartz created this Life Tributes page to make it easy to share your memories.