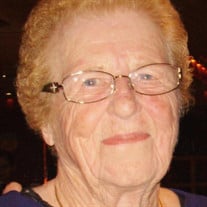 Marjorie Parker “Margie” Schloesser, 97, of Franklin, TN passed away January 26, 2021, at NHC Healthcare, Franklin, TN. Margie was born on March 10, 1923 in Vildo, TN to Roscoe Owen Parker and Nannie Velma Pirtle Parker. She attended Central High School in Brownsville, TN and married Benjamin Curtis Wilkes, with whom she had three children. She married John Wendell Schloesser on March 23, 1973. She was a resident of Memphis, TN from 1942 until 2003, employed as a medical secretary and various administrative occupations when she retired and moved to the Adamsville, Tennessee area. She had been living in Franklin, Tennessee since 2015. Margie enjoyed many hobbies during her life, including bowling, travel, trout fishing, camping, square dancing and knitting. She loved nature and wildlife, especially the swarms of Hummingbirds that would visit the feeders on her porch every summer when she lived in Adamsville. She was a loving, caring mother and always thought kindly of others and was a friend to many. She will greatly be missed and fondly remembered by all. She is predeceased by her father and mother; son Curtis Randall “Randy” Wilkes; brother Dorris A. Parker; and husband John Wendell Schloesser. She is survived by daughters Peggy Wilkes Leathers, of Crump, TN and Sheryl J. “Sheri” Wilkes of Franklin, TN; granddaughter Kimberly Leathers Payne (Danny) of Toone, TN; great-grandchildren: Kelsey Wakeley of Toone, TN; Karlee Mosley (Morgan) of Oakland, TN; Colton Payne of Toone, TN; and cousin Cordell Pirtle (Tawanda) of Memphis, TN. The visitation will be from 9:30 a.m. to 10:30 a.m., February 2, 2021 t Memorial Park Funeral Home and Cemetery in Memphis TN. The graveside service will be held at 10:30 a.m. also on Tuesday, Memorial Park Funeral Home and Cemetery.

The family of Marjorie Parker "Margie" Schloesser created this Life Tributes page to make it easy to share your memories.

Send flowers to the Schloesser family.