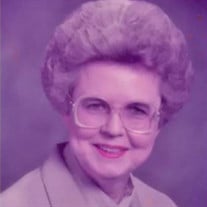 Mabel Jean Kurts, born October 28, 1927, in Arlington, TN to John Llewellyn Kurts, Sr. and Iva Pearl Harvell Kurts. Jean grew up in Memphis and graduated from Humes High School in 1945. After living in Tulsa, Oklahoma for ten years, she came back to Memphis and went to work at Plough, Inc. (later Schering-Plough) in 1959. She was an Executive Secretary for a few years before moving to the Personnel department where she worked as a Compensation Analyst until her retirement in 1993. Jean loved to travel, read books, and spend time with her family. If a loved one needed help, she was right there. Jean lived most of her life in Memphis, but spent the last few years in Franklin, TN in assisted living where she was known as Mabel. She passed away peacefully on Saturday, February 26, 2022. In addition to her parents, she was preceded in death by both of her brothers, John L. Kurts, Jr. (Margaret) and William Dale "Bill" Kurts (Barbara) whom she called Bubba. She was also preceded in death by nephew Jeff Kurts. Survivors include her sister-in-law, Barbara Kurts of Lexington, SC; niece, Mindy Kurts and great niece, Aubree Kurts of Franklin, TN; nephews Ken Kurts (Jeralyn) of Indianapolis, IN; Chris Kurts and Keith Kurts of Douglasville, GA; and Bill Kurts of Lexington, SC. Funeral services at Memorial Park Funeral Home and Cemetery, 5668 Poplar Ave. Visitation at 10:00 am on Friday 3/4/22 followed by services at 11:00 am.

The family of Mabel Jean Kurts created this Life Tributes page to make it easy to share your memories.

Send flowers to the Kurts family.