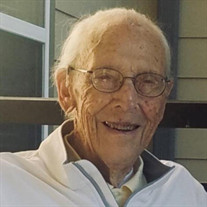 Middleton Barnett Wingfield Jr., known as Wing to his friends, Pop to his son, and Big Daddy to his family, began his new day in the arms of our Lord Jesus at the age of 102 on October 19, 2020. Wing, who was born in Athens, Georgia, served in the Navy during WWII, and was stationed at Pearl Harbor, Midway Island and aboard the U.S.S. Ash. He attained the honorable rank of Chief Pharmacist's Mate, also serving as an operating room technician. Wing worked as a salesman for RJ Reynolds Tobacco Company in Tullahoma and Chattanooga, but eventually moved to Memphis in 1951. He retired from a fulfilling 38-year career as Division Sales Manager in 1977. Wing and his family joined Colonial Park United Methodist Church in 1954, where he was a member up until his death. He had a deep love for Jesus Christ, his church family, and the many friends he made from his faith. He married his beloved wife of 74 years, Martha Frances Adams of Dublin, Georgia, in 1940. They were blessed with three children: William Edison Wingfield, Middleton Barnett Wingfield III, and Martha Ann Wingfield. He is preceded in death by his wife, Frances, son William E. Wingfield, daughter Martha Ann Wingfield Poley, mother Lura May Kenimer Wingfield. He is also preceded by his father Middleton Barnett Wingfield Sr., and sister May Wingfield Melton, brother-in-law Oliver Quimby Melton Sr. of Griffin, GA., sister-in-law Joy Wilkes Wingfield. He is survived by his brother William T. Wingfield of Athens, Georgia, son Middleton B. Wingfield III (Nina), nine grandchildren, Middleton Wingfield IV (Rachel), Monte Wingfield (Angela), Robert Wingfield (fiancé Lucy Loveless), Jacob Wingfield (Leah Beth), Taylor Sterling (Candy), Emily Adams (Matt), Lane Arthur, Caleb Poley, Will Wingfield (Amy), and sixteen great grandchildren, along with one great, great grandchild. Wing was a member of Windyke Country Club, where he won the Senior Club Championship in 1968. He made four hole-in-ones over the course of his time at the Club, the last coming at age 88. Windyke’s "Over The Hill Group" hosts the M.B. Wingfield Cup Tournament in his honor. The tournament has been played annually for the past 14 years. The winner receives a coveted trophy bearing Wing's name. The Wingfield family would like to extend their warmest thanks and gratitude to the management, staff, and many friends at Brookdale Dogwood Creek, formerly the Solana, for the love and attention Wing received for the past seven years. They also kindly thank the nursing staff and management at the Baptist Reynolds Hospice House in Collierville for their kindness and tender care in his final days. There will be a Celebration of Life at a later date when the COVID-19 pandemic is over and family along with friends can rejoice in a life well lived. In lieu of flowers, memorials can be made to Colonial Park United Methodist Church for his devotion to his church or to the SPCA of Memphis (spcamemphis.org) because of his love of animals.

Middleton Barnett Wingfield Jr., known as Wing to his friends, Pop to his son, and Big Daddy to his family, began his new day in the arms of our Lord Jesus at the age of 102 on October 19, 2020. Wing, who was born in Athens, Georgia, served... View Obituary & Service Information

The family of M. B Wingfield Jr created this Life Tributes page to make it easy to share your memories.

Middleton Barnett Wingfield Jr., known as Wing to his friends,...

Send flowers to the Wingfield family.