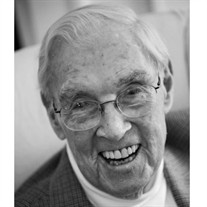 M. M. (Jack) Gordon, national trucking industry leader, civic leader and retired President of Gordons Transports, died on April 9, 2020 . He was 98 years old. Jack was born September 28, 1921 in Parkin, Arkansas. He graduated from Central High School in Memphis and from Northwestern University with a degree in Transportation. He enlisted in the U.S. Navy during World War II and served aboard a Destroyer Escort with the rank of Lieutenant. During his time aboard, he saw action during the campaigns to capture Saipan, Iwo Jima and Okinawa. Upon discharge from the Navy in 1946, he returned to Memphis and married Betty Jane Hall in 1947, to whom he was married for 53 years until her death in 2000. Jack was named President of Gordons Transports in 1947 and continued in that role until retiring in 1978. During this period, Gordons Transports grew into one of the largest family-held trucking concerns in the nation. He was extensively involved in the city’s economic and political life during his business career. He enjoyed working in leadership positions with various interests to marshal resources and talent to address the various challenges faced by the city. He was also active working with legislatures across the South representing the trucking industry. In addition to numerous national industry leadership positions, Jack served as Chairman of the Shelby County Industrial Development Board. He was past President of the Memphis Area Chamber of Commerce, United Way of Memphis and the Tennessee Motor Transport Association. He was a past Board member of First Tennessee Bank and First Tennessee National Corporation. He was a founding and long serving Board member of Memphis University School. He was a member of Second Presbyterian Church for 35 years. Jack was a member of the Memphis Country Club where he made many life-long friends playing golf. Jack is survived by his wife of 18 years, Mary Alice Semmes Gordon, and sons McClain Gordon, Wakefield Gordon (Lia) and daughter Jane Gordon Simmons, and step-daughter Missy Fuehrer (David), all of Memphis. He is also survived by grandchildren Kat Gordon (Thomas), A.W. (Kip) Gordon (Christina) and Preston Gordon (Elizabeth) of Memphis; Walker Simmons (Katie) of Atlanta, Hall Simmons (Jennifer) of Nashville and Jane Simmons Schmidt (Brandon) of Nashville; and step-grandchildren Lucian Fuehrer (Rebekkah) of Kansas City and Tyler Fuehrer of Memphis; and 12 great grandchildren. The family wishes to extend their gratitude to his caregivers Mary Williams, Beatrice Mason, Tina Matthews and Sandra Butto for their assistance and compassionate support. A private graveside service will be held at Memorial Park Cemetery for family members only due to the current national health crisis. A memorial service will be held at a later date. In lieu of flowers, memorials may be sent to Trezevant Episcopal Home at 177 North Highland, 38111 or the Church Health Center at 1350 Concourse Ave Suite 142, 38107 or to the charity of the donor’s choice.

The family of M.M. "Jack" Gordon created this Life Tributes page to make it easy to share your memories.

Send flowers to the Gordon family.