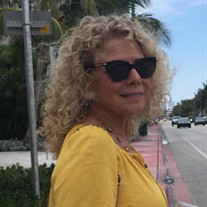 On August 16, 2021 Lynda Julianne Ramsey Spratlin made her journey to a better place. She lived in Collierville, TN since 2013 after growing up and living in both Southern and Northern California for all of her life prior. Lynda was born in Hollywood, California, and before you ask, yes, she was a child “Star.” Acting in several Twilight Zone episodes and if you’re an old movie buff and check out the Music Man musical. The little curly headed blonde girl in the parade, that's Lynda. She graduated Culver City High School in 1965 and earned an A.A. degree in Dental Hygiene at UCLA. Lynda grew up in a House divided with half the family staunch UCLA fans and the other half of the family staunch USC fans. Regrettably her parents Emily and Allan came down on the USC side. Lynda was one of the most sincere, sweetest, and most compassionate individuals you could have ever had the pleasure and the good fortune to have known. She had friends from coast to coast; in northern and southern California, Washington state, Arizona, Idaho, Tennessee, Georgia, and the Carolinas to mention a few. She was preceded in death by her father Allan Ramsey who passed away on the very same day, August 16, in 2009. Lynda is survived by her mother, Emily “Baby” Ramsey; sister Susan Ramsey Rood; and brothers, Richard Ramsey and Randy Ramsey. Additionally, she is survived by her husband, Michael Spratlin; sons, Brett Campfield, Matt Campfield, Terran Spratlin, and Phil Siegel; and grandchildren, Collier Campfield, Cooper Campfield, and Levi Siegel. A Fireside Ceremony is to be held in her memory on Sunday, August 22, 2021 at the Fireside Chapel in Memorial Park Funeral Home in Memphis from 2pm until 4pm. Please come dressed casually as you would come to a lunch or cocktail with Lynda. A second Memorial will be held in Southern California in mid-October. To have been a part of her life was a blessing. Arrangements have been entrusted to Memorial Park Funeral Home and Cemetery, 5668 Poplar Ave, Memphis, TN 38119, 901-767-8930 "A Fitting Farewell for Everyone"

On August 16, 2021 Lynda Julianne Ramsey Spratlin made her journey to a better place. She lived in Collierville, TN since 2013 after growing up and living in both Southern and Northern California for all of her life prior. Lynda was born in... View Obituary & Service Information

The family of Lynda Julianne Spratlin created this Life Tributes page to make it easy to share your memories.

On August 16, 2021 Lynda Julianne Ramsey Spratlin made her journey...

Send flowers to the Spratlin family.