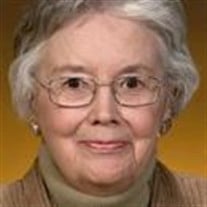 Lucy Jane Drake Collins, 95, passed away Saturday, February 22, 2020, at Baptist Memorial Hospital. She was born February 12, 1925, in Memphis, Tennessee, the daughter of the late Kenneth Purvis 'K. P.' Drake and Ellie Scott Drake. Jane graduated from Snowden School and Central High School. She attended the University of Tennessee, Knoxville, and was a member of Alpha Delta Pi sorority. It was at UT that she met her future husband, Herbert Eugene "Gene" Collins. Jane was a member of Trinity United Methodist Church and UMW Circle. She enjoyed art and visiting museums, playing bridge, travelling and fishing, often out fishing Gene. In addition to Memphis, the family lived in Richmond, VA and Louisville, KY. She and Gene later lived briefly in Ossining, NY. She was preceded in death by Gene, her husband of 60 years; her sister Katherine and brothers Kenneth, Charles and Carl. Jane is survived by her daughter Barbara and her husband Richard of Prospect, KY, her son Robert and his wife Paula of Memphis, and extended family members. Special thanks go to Dr. Hugh Overstreet for his years of compassionate care, and to her in-home caregivers, Gwendolyn Dodson and Mary Robertson, who would take Jane to her favorite spot to view the Mississippi River. Funeral will be 11:00 AM, Wednesday February 26, 2020, at Trinity United Methodist Church, 1738 Galloway Ave. Burial at 1:30 PM, Memphis Memorial Park Cemetery, 5668 Poplar Ave. In lieu of flowers, expressions of sympathy may be made to Trinity United Methodist Church, 1738 Galloway Ave., Memphis, TN 38112.

The family of Lucy Jane Drake Collins created this Life Tributes page to make it easy to share your memories.

Send flowers to the Collins family.