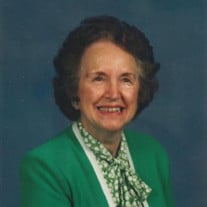 Allane Simpson Demetrio died at home on November 4, 2020 at age 105. Laney, as she was affectionately known to her family and friends, was born on May 7, 1915 in Indianola, Mississippi. She attended the University of Alabama where she met David Louis Simpson, Jr. They were married in 1935 and moved to Memphis. They became the parents of three children, David, Jon and Amy. When her children graduated from high school, she went back to college and graduated from Memphis State University with a degree in education. She began a new career as a third grade teacher with the Memphis City Schools. After the death of her husband in 1973, she married George Edward Demetrio in 1987. They became active members of the St. John Methodist Seniors Group in which they found deep and lasting friendships and great joy in singing, dancing and performing. A highlight of their years together was the invitation to the St. John’s Senior Group from Nancy Reagan to perform at the White House. Laney was a longtime member of Trinity United Methodist Church where she was known as the “costume lady” for her ability to create a costume “out of nothing” for the church’s performances. She was blessed with creative ability which she expressed in poetry and writing, in song and dance and in beautiful needlework. Most of all she was known for her kind and loving heart. Laney was predeceased by her husbands David L. Simpson, Jr, and George Demetrio and by her son David L. Simpson, III and her daughter Amy Simpson Redmon. She is survived by her son Dr. Jon Alan Simpson and his wife Caroline and by her daughter in law, Beth Simpson, and seven grandchildren, 14 great grandchildren and one great-great grandchild. At a graveside service held on November 6, 2020, her family gathered together to celebrate her life lived fully and joyfully. A Birthday Prayer Today Dear Lord, I'm 80 and There's much I haven't done. I hope Dear Lord you’ll let me live till I'm 81. But then, if I haven’t finished all I want to do, Would let me stay awhile… Until I'm 82? So many places I want to go, So very much to see… Do you think that I can make it 83? The world is changing very fast. There is so much in store. I'd like it very much to live until I'm 84. And if by then I'm still alive, I'd like to stay ‘til 85… More planes will be up in the air, So I'd really like to stick and see what happens in the world when I’m 86. I know Dear Lord it’s much to ask (and it must be nice in Heaven) But I would really like to stay until I'm 87. I know by then I won’t be fast and sometimes will be late; But it would be so please to be around 88. I will have seen so many things, And had a wonderful time. So, I'm sure that I'll be Wiling to leave at 89…maybe. I'm 90 Lord, my mind is sound; I like it here – I can still walk around. My time is limited I know, and someday I'll have to go! I'm not greedy or guided by fears; I want to see what happens in the next few years. I'm sure you’ve heard this plea before, But my bags will be packed at 104! By Laney Simpson Demetrio

Allane Simpson Demetrio died at home on November 4, 2020 at age 105. Laney, as she was affectionately known to her family and friends, was born on May 7, 1915 in Indianola, Mississippi. She attended the University of Alabama where she met David... View Obituary & Service Information

The family of Mrs Louise Allane Simpson Demetrio created this Life Tributes page to make it easy to share your memories.

Send flowers to the Demetrio family.