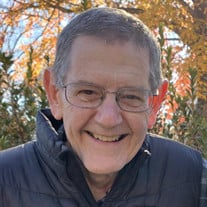 Louis Michael Santi, age 74, passed away on January 6, 2022 in Memphis, Tennessee. He passed quickly and peacefully with his wife and children by his side. Mike was born on December 7, 1947 in Memphis, Tennessee to Louis Santi and Opal Ellison Santi. He attended Christian Brothers High School and Christian Brothers College in Memphis. He received a Masters Degree in Mathematics from University of Tennessee – Knoxville and then earned a Doctorate of Mechanical Engineering from Vanderbilt University. Mike became a Professor of Mechanical Engineering at Christian Brothers University where he taught for 15 years. Mike was fascinated by space. While at Christian Brothers he began working with NASA, eventually leaving CBU to work full time with NASA. At Marshall Space Flight Center in Huntsville, AL and Glenn Research Center in Cleveland, Ohio, Mike worked on rocket engine propulsion for the Space Shuttle among other programs until 2019. Science and teaching were not just careers for Mike, they were his calling. In the days and weeks before his passing, Mike could regularly be found helping his grandson with his geometry homework, talking with his colleagues at NASA and on occasion working engineering proofs of his own creation at home. Mike will be remembered for his kindness and friendship, his strength and integrity, a quick smile and hearty laugh, and his keen mind and gentle heart. Mike was a great storyteller and an even better listener. He had a rare gift for taking complex subjects and distilling them down to easy-to-understand messages – whether teaching thermodynamics to college students, explaining to his 7 year old granddaughter why we have seasons, or giving an impromptu lesson on gun safety to a troop of boy scouts. Mike loved the outdoors and travel. As a student, he enjoyed hiking in the Smoky Mountains and enjoyed walking the woods and hills of Tennessee throughout his life. He planned spectacular trips to National Parks with his family throughout the country. His favorites included visiting the geysers of Yellowstone, hiking the alien rock formations of the Dakota Badlands and flying in a 9-seater prop plane to watch bears fish for salmon in the pristine waters in Lake Clark, Alaska. Mike also enjoyed frequent trips to Colorado and Virginia to visit his children and grandchildren. Mike loved baseball - whether taking in a Red Birds game, helping to coach his son’s Little League teams or as a spectator at his grandson’s Little League games. Mike was a member of the Memphis Sport Shooting Association where he combined his love of Westerns and things that go ‘Boom!’ as a member of the Cowboy Action shooting group at MSSA joining in many competitions and fireside chats under his cowboy name “Loosahatchie”. Through all these adventures and many others, his wife of 51 years, Jane, was by his side. Mike and Jane met in graduate school in Knoxville. She was the love of his life and best friend, and their devotion to one another throughout their lives together was an inspiration to family and friends. In addition to his wife, Jane, Mike is survived by his loving children and grandchildren: his daughter Emily Waterman and son-in-law Tim, his son Mark Santi and daughter-in-law Peggy, and his four grandchildren, Tyler, Evelyn, Isabelle, and Calvin. He is also survived by his brother Ron Santi of Florida. Mike enjoyed life to the very end. He met pandemic restrictions and health challenges the same way he weathered all challenges in life – with grace, bravery, humor and determination and with Jane by his side. Visitation will be held Saturday, January 22nd from 10:00am with a memorial service at 11:00am in the Fireside Chapel at the Memorial Park Funeral Home. In lieu of flowers, donations may be made to St. Jude Children’s Research Hospital. To view the online memorial tribute video. Click the link below to view. https://www.tributeslides.com/tributes/show/5W7KK5GHCDP9GQKB To view the webcast memorial service. Please click the link below to view. http://webcast.funeralvue.com/events/viewer/67566/hash:B5AC3EDA0E7AB7AB

Louis Michael Santi, age 74, passed away on January 6, 2022 in Memphis, Tennessee. He passed quickly and peacefully with his wife and children by his side. Mike was born on December 7, 1947 in Memphis, Tennessee to Louis Santi and Opal Ellison... View Obituary & Service Information