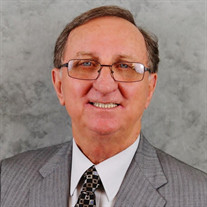 Louis Gresham Clay, Jr. "Buddy" died peacefully in the early morning on Monday, March 14, 2022. Louis was 78 years old. He was a long time resident of Germantown, Tennessee. He was preceded in death by his parents, Louis G Clay, Sr and Mary Katherine Clay. Also by his wife, Jean Clay, who died last year. He leaves behind his daughter, Lisa Clay (Nic Getske) and his grandchildren, Jonathan, Lincoln and Emma. His son, Louis G Clay III "Trey" and grandson, Walker. His sister, Gail Gaddie and his three nieces who he loved dearly. Louis attended Gutherie and Humes High School in North Memphis. Afterwards he attended Northwest and Memphis State. He left college to take a job with Firestone and moved to Union City in 1963. This is when he decided to ask Jean to marry him. Soon after they were married, Louis got his draft notice. They moved back to Memphis and Louis worked briefly for his Uncle, Edward Land, until he joined the Marines. He served from October 1966 until October 1968 and did his tour of duty in the Vietnam War. After returning home to Memphis, he went back to Memphis State and back to the insurance business with his Uncle. Eventually, the agency became Clay and Land Insurance, which is one of the largest independent Insurance Agencies in the Mid-South. Louis served on many advisory committees for insurance carriers and was President of the Insurers of Tennessee in 1993. Louis also enjoyed his cattle company in North Mississippi and that is where he and his wife spent much of their free time raising cows. All funeral arrangements will be held at Memorial Park Funeral Home, 5668 Poplar Ave, Memphis, Tennessee 38119. Visitation is Monday, March 21, 2022 5:00 p.m. -7:00 p.m. The funeral is Tuesday, March 22, 2022 10:00 a.m. followed by graveside. Afterwards everyone is invited to the event room at Memorial Park to gather with food and drink to celebrate the life of Louis G Clay, Jr.

Louis Gresham Clay, Jr. "Buddy" died peacefully in the early morning on Monday, March 14, 2022. Louis was 78 years old. He was a long time resident of Germantown, Tennessee. He was preceded in death by his parents, Louis G Clay, Sr and Mary... View Obituary & Service Information

The family of Louis G. Clay Jr. created this Life Tributes page to make it easy to share your memories.

Send flowers to the Clay family.