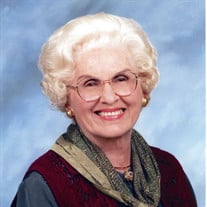 Lee S. Hooker passed away on Friday August 8, 2020 at the Chateau Senior Living Center in Kenner La at the age of 96. She lived a very active and adventurous life. She was born on July 18, 1924, to John W. and Ruby Elliott Stauffer in Pine Bluff, Arkansas. The second of 3 children, her older brother Wesley died before his first birthday, and her younger brother 2Lt Bill James Stauffer was killed in the Korean conflict in 1953. At the age of 5, Lee began taking dance lessons, and by the age of 14 was teaching her own students. In 1938 she opened her own Dance Studio, which she operated for 9 years in her parent’s tiny living room in Pine Bluff. By the age of 17, she was named one of the top five Businesswomen of Southeastern Arkansas for the many contributions she and her students provided to their community. In order to keep up with the latest dances, she would spend her summers taking class in LA, New York, Chicago, and other cities, this would lead her to opportunities to dance in USO and other shows, including the Bing Crosby’s Caravan, and The Abbott and Costello Musical Comedy Review. In 1948, she moved to Memphis, and became an Airline Stewardess with the Chicago Southern Airlines. Following that career, she joined the faculty of the first Ballet Company in Memphis: The Academy of Dance Arts, and joined the dance chorus at the MOAT, (Memphis Open Air Theater), becoming the assistant dance director and choreographer for the MOAT in 1951. Later in 1952, she began working at First National Bank, where she met the love of her life, Henry S. Hooker. They were married in 1952, and enjoyed an active lifestyle, while she was involved with her church Calvary Episcopal Downtown, The Nineteenth Century Club, and King’s Daughters and Sons, as well as other Ladies’ Community Service organizations. Sadly, Henry passed away in 1992, and she eventually moved to Kenner, La. to be near to her daughter. For an extended detail of her remarkable life one can access the following blogpost https://carolynhookerer.blogspot.com/2020/07/ruby-lee-stauffer-sug-mimi-hooker.html . She leaves behind her daughter, Karen H. Brown (Richard), of Kenner, LA, and her son, Henry J. Hooker (Carolyn) of Memphis, four grandchildren; Matthew J. Hooker, Elizabeth M. Hooker, Stephen C. Hooker and Sara Bhagwan (Jay), and one great grandson, Levi J. Hooker, all of Memphis. She also leaves a loving extended family, and a host of dear friends both here in Memphis and in Kenner. The family will receive visitors between 11 am and 1 pm on Saturday at Memorial Park Funeral Home on Poplar with a graveside service at 1PM. Memorials can be sent to a charity of the donor’s choice, but some of her favorites would be King’s Daughters and Sons Home in Bartlett, TN or Calvary Episcopal Church.

Lee S. Hooker passed away on Friday August 8, 2020 at the Chateau Senior Living Center in Kenner La at the age of 96. She lived a very active and adventurous life. She was born on July 18, 1924, to John W. and Ruby Elliott Stauffer in Pine Bluff,... View Obituary & Service Information

The family of Lee S Hooker created this Life Tributes page to make it easy to share your memories.

Send flowers to the Hooker family.