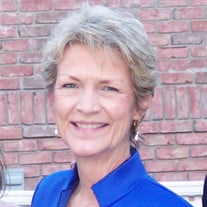 Lavonne “Bonnie” Robinson- 76 of Germantown, TN went to be with our Lord on Thursday February 6th, 2020. She is survived by her loving husband of 53 years, Mike Robinson, two children, Michelle McDearman (Robert) and Chris Robinson. She is also survived by two grandchildren Thomas McDearman and Annaleigh Robinson who brought her much joy and to whom she loved being Nana. Born in Bartlesville, OK to the late Nate and Helen Beal she spent her early years living in the Midwest before moving to Cottage Grove, TN in junior high. Following her graduation from E.W. Grove High School in Paris, TN, she went on to Oklahoma State University. While at OSU she was on the rifle team and earned her degree in Interior Design. Shortly after graduation, she and Mike were married and moved to Memphis, TN. During this time in Memphis she worked for MLGW as a Home Economist then later as one of the first female Computer Programmers at the company. In the early 1970’s, she lived briefly in Chicago and New York City before finally spending 10 years in Weston, CT. She dearly loved Weston and while there made many lifelong friends. It was during her time in Weston that she was initiated into P.E.O., an organization in which she would become a lifelong active member. In the spring of 1984, she relocated with her family to Germantown, TN. She was heavily involved in many Germantown organizations. She joined Chapter AA of P.E.O. and served the chapter in all capacities holding various offices including Treasurer and President. She was first involved at the Germantown Community Theater as a volunteer. She went on to serve as Executive Director for many years as well as sit on and hold various offices including President on both the GCT Board of Directors and GCT Guild. Bonnie was also very involved with the West Tennessee Hunter Jumper Association. She also served on the WTHJA board holding many offices including Treasurer and President. She was a long-time member of Faith Presbyterian Church where she actively attended Sunday School and the Women’s Bible Study. She enjoyed gardening, reading, sewing, and especially crosswords and sudoku. She was a wonderful wife, mother and Nana who took exceptional care of her family by always selflessly giving her love and time. There is no doubt her passing will leave a void in all the lives she touched, however she had enough love to fill our hearts full of precious memories that will carry her legacy into the future. A celebration of life will be held on Wednesday February 12th at 11 AM at Faith Presbyterian Church 8816 Poplar Pike Germantown, TN. Family has asked any flowers being sent as an expression of sympathy go to the church on the day of the service and any monetary donations to please be made to the Breast Cancer Research Foundation (BCRF.org) as she was a two time breast cancer survivor.

Lavonne &#8220;Bonnie&#8221; Robinson- 76 of Germantown, TN went to be with our Lord on Thursday February 6th, 2020. She is survived by her loving husband of 53 years, Mike Robinson, two children, Michelle McDearman (Robert) and Chris Robinson.... View Obituary & Service Information

The family of Lavonne "Bonnie" Robinson created this Life Tributes page to make it easy to share your memories.

Lavonne “Bonnie” Robinson- 76 of Germantown, TN went to be with...

Send flowers to the Robinson family.