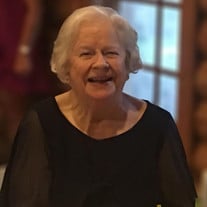 Lavinia Whatley Skinner went to be with the Lord on Saturday, April 23, 2022. She was the widow of Robert William Skinner, Sr, who passed away in 2012. Lavinia was born on August 9, 1931 in Claxton, Georgia to Samuel James and Sara Edwards Whatley. She graduated from Covington High School in Georgia. She then attended Oxford College of Emory University and graduated from Georgia College and State University in 1952. From there, she taught high school in Moultrie, Georgia, where she met Bill Skinner of Collierville, Tennessee. They were married in Claxton in 1953 and the following year their daughter, Amy was born. They moved to Memphis where Bill joined the family business, Forest Hill Dairy and they had two sons, Rob then Joe. Lavinia was active in the lives of her children and was a parent volunteer at Memphis University School and served as PTA president at White Station High School. She served the Memphis community through various organizations and was President of both the Laurelwood and Parkdale Garden Clubs, President of the Memphis Woman’s Exchange, and was a Paul Harris Fellow of Rotary International. She loved to sing and was a soloist in the church choir for many years at Mullins Methodist Church and later sang with the Chancel Choir of Second Presbyterian Church. She also sang in the Memphis Symphony Chorus, the Sarah Beth Causey Chorale, and was a member of the Memphis Symphony League. As a member of Second Presbyterian Church she served as president of Women of the Church, Circle Chairman, and was active in Women’s Bible Study. Lavinia was recently celebrated for her 60th year as a member of the Daughters of the American Revolution, where she held the position of Regent of her local chapter. She will be remembered for her charming Southern wit, sincere kindness, and the immense love she had for her family and friends. She was preceded in death by her parents, stepfather Joseph Miller, husband, brother Samuel James Whatley, Jr, and a great grandson. She leaves daughter, Amy Skinner Meadows (Dan), sons Robert William Skinner, Jr. and Joseph Whatley Skinner (Missy), and eight grandchildren: Catherine Meadows, Ginny Meadows Reed (Joe), Beth Meadows, Holly Skinner Kitchings (Trey), David Skinner (Amy), Sara Skinner Brisco (Cole), Joseph Skinner (Ally), Gabe Skinner, and 4 great grandchildren. She also leaves stepbrothers Richard Miller of Lakeland, Florida and Joseph Miller (Pat) of Annapolis, Maryland. A memorial service will be held on Saturday, April 30th, at 11:00 am at Second Presbyterian Church with visitation at 10:00 am in the Salmon Room. Gifts may be made to the Second Presbyterian Church Missions Fund.

Lavinia Whatley Skinner went to be with the Lord on Saturday, April 23, 2022. She was the widow of Robert William Skinner, Sr, who passed away in 2012. Lavinia was born on August 9, 1931 in Claxton, Georgia to Samuel James and Sara Edwards Whatley.... View Obituary & Service Information

The family of Lavinia Skinner created this Life Tributes page to make it easy to share your memories.

Lavinia Whatley Skinner went to be with the Lord on Saturday,...

Send flowers to the Skinner family.