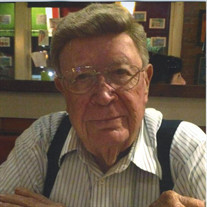 Larry Edward Mivelaz, 90, of Collierville, went to be with the Lord, his wife, parents and other family and friends on Wednesday, October 28, 2020. He was a native Memphian and the only son of Lucille Stewart Mivelaz and Lawrence Mivelaz. He was married for 47 years to Dorothy Ford Mivelaz. They had two children, Patricia Mivelaz Foster (David) and Barbara Mivelaz Baldwin, three grandchildren, Megan Foster Jones (Nick), Nicolas Foster and Kendall Baldwin, and two great-granddaughters, Savannah Reese Jones and Harley Jeannette Jones. Larry attended Blessed Sacrament Elementary School and later went to Christian Brothers High School graduating in 1948. He played four years of baseball while in High School. After High School, he played independent baseball (which is similar to the minor leagues today) for three years with the Whitehaven Independents. He studied Business for a short time at then Memphis State University. Larry began his lifetime career in sales at Western Auto. After two years in the U.S. Army, he returned to work for Western Auto and then went onto Hollis Appliances selling Frigidaire Appliances. Larry later worked for McGregor's, becoming the Frigidaire District Manager for the next 8 years. In 1964, the company went under General Motors and Larry continued to work the next 24 years (in both Little Rock, Arkansas and Memphis, Tennessee) retiring on December 31, 1987. After one day of retirement, Larry went to work for Crye-Leike Realtors, becoming a realtor. Within five years, Larry achieved a life membership award to the Multimillion-Dollar Club of Crye-Leike. Larry also worked at Adaro Realty in the referral real estate business till he retired his license because of medical issues. Larry lost Dorothy in May of 1998. He met a special lady, Gloria Pearson, in March of 2000 and they were together for over 14 years until Gloria needed to move to Florida to be closer to her family. They enjoyed trips to Tunica Casinos, Senior functions at Incarnation Catholic Church, card games with friends, Bingo, movies and traveling. Larry enjoyed playing and watching golf. He was an original member of Windyke Country Club for 51 years. He enjoyed watching sports and some of his favorite teams were the St. Louis Cardinals, Notre Dame football and basketball, the University of Memphis football and basketball, the Arkansas football programs, and the Green Bay Packers. In his younger years he was an Eagle Scout. Larry is a devout Catholic and has attended four Catholic Churches in his lifetime. He attended weekly mass at Carriage court assisted living. In November of 2018, Larry had to be admitted to Christian Care Center of Memphis due to his declining health and needs. He continued to enjoy his time there going out on luncheons with other residents, playing Bingo, visits out with his family to celebrate birthdays and other holidays. Larry was very much a family man and his Catholic faith was very important to him. He had a great love for people, the city of Memphis and this great country of ours. The family will receive relatives and friends on Wednesday, November 4, 2020 from 3:00 pm until 5:00 pm at Memorial Park Funeral Home and Cemetery, 5668 Poplar Avenue in Memphis. There will be a rosary at 9:45 am followed by a funeral mass at 10:00 am on Thursday, November 5 at Catholic Church of the Incarnation, 360 Bray Station Road in Collierville. There will be a private burial immediately following. Memorial contributions can be made in Larry's name to either the church or to St. Jude Children's Research Hospital, 501 St. Jude Place, Memphis, Tn 38105. To view the tribute slideshow click the link below: https://www.tributeslides.com/tributes/show/XMF2NHK6ZGF7NLB4

Larry Edward Mivelaz, 90, of Collierville, went to be with the Lord, his wife, parents and other family and friends on Wednesday, October 28, 2020. He was a native Memphian and the only son of Lucille Stewart Mivelaz and Lawrence Mivelaz. He... View Obituary & Service Information

Larry Edward Mivelaz, 90, of Collierville, went to be with the...