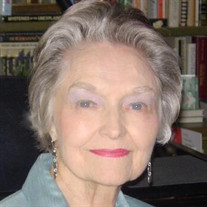 Lady Joan Nellis, 89, passed away on December 21 at her home in Memphis. Lady was born on May 11, 1931 in Lovington Lea County, New Mexico. She was the daughter of Arthur Bryan Hennington and Bernice Bridges Hennington. She married Richard Ostrom Nellis in 1978 in Memphis. She had the privilege of helping to raise her two stepsons Donald Martin Nellis and Joseph Michael Nellis. Lady and Richard were competitive square dancers for several years, and traveled all over the country to show off their considerable talents and skills. Lady had a passion for classical music. She was an accomplished professional musician, performer and educator. She even received the honor to perform at Carnegie Hall in NYC. Upon retirement from her 34 year teaching position in Memphis public schools, Lady enjoyed teaching piano in her beautiful music room. She earned a MA in music education from Columbia University in NYC. Lady was an avid and successful gardener, and designer of creative crafts. Also, she traveled extensively with members of her church; making several trips abroad to learn more about different faith groups and cultures. Earlier in her life, she was determined to build her own home and studio facility. Once she set her mind on something – she got it done. And, likewise, she earned her pilots license. She was a petite “ball of fire!” Recently Richard and Lady, together, observed and documented every bird that visited their many bird feeders just outside their large picture window in their dining room. Throughout her life, she enjoyed the beloved company of many adoring dogs. She gave them beautiful names, and patiently trained them all herself. They were one of the joys of her life. Lady was an active member and leader in the Christ United Methodist Church of Memphis. She served on the Board frequently, and served as President of United Methodist Womens Group, became a member of the Chancel Choir, and the Lamplighters Sunday School Class and directed the Handbell Choir. She found her niche in the music program of the Church. But that wasn’t all. In addition, she founded the “Threads of Love,” a group that sewed items for patients, and made hundreds of fleece scarves for the homeless. A comment from a friend described Lady as “although short on statue, Lady was a giant and will be missed.” Lady lead a long, devoted and very productive life. She is survived by her husband Richard of Memphis, Don too of Memphis, and Joe of Florida, her nieces and nephews, Margaret and Bryan Abel, Tamara Winkler and Sherry Nevins. A memorial service will be held on Wednesday, July 21 at 10:00 am at Christ United Methodist Church, 4488 Poplar Avenue in Memphis. The committal service will immediately follow at 11:30 am at Memorial Park Cemetery, 5668 Poplar Avenue also in Memphis. Donations in Lady’s memory may be made to the Christ United Methodist Church of Memphis, 4408 Poplar Avenue, Memphis, TN 38117. “I seek to develop a growing devotion to my Creator, and to become, increasingly, a contributing member of society. I see beauty all around us, in many things and experiences, and am in awe of God’s beauty and amazing gifts to humanity.”

Lady Joan Nellis, 89, passed away on December 21 at her home in Memphis. Lady was born on May 11, 1931 in Lovington Lea County, New Mexico. She was the daughter of Arthur Bryan Hennington and Bernice Bridges Hennington. She married Richard Ostrom... View Obituary & Service Information