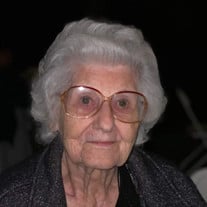 Kathryn Rebich Tickle, prominent Millington business professional, leading lady and matriarch of the Tickle Family of West Tennesse. Kathryn Rebich Tickle, known in her younger days to family and friends as Katy, died August 25, 2020 peacefully at her home in Atoka, Tennessee. Visitation is scheduled for 12:00 noon to 1:00 p.m. with Memorial Service following at 1:00 p.m. at Memorial Park Funeral Home, Memphis Tennessee, 5668 Poplar Avenue, Memphis, Tennessee, on Saturday, September 5, 2020. Internment next to her beloved husband, Jack, of sixty-seven years immediately following service. Mrs. Tickle was born and raised in 1923 to Mike and Anna (Sajatovic) Rebich in Johnston, Pennsylvania and later moved to Cleveland, Ohio. She was one of seven surviving children, four brothers and two sisters. She was the young girl who first caught her husband’s eyes when he was in the US Navy. They lived in California, Missouri, and eventually made their home in Memphis where they raised their family. While working in the Memphis headquarters of Sears, she raised her family of five children while supporting her Mother and Mr. Tickle’s blossoming career. She and her husband, Jack, built a successful real estate development and property management business starting in 1949 to present. As a family, many times they would personally do the lawn care for real estate properties Mr. Tickle had listed when they were just starting. After her husband’s death in 2011, she continued to lead the family business, working 3-4 days a week and never missing Friday, which was payday and “hair” day. Mrs. Tickle was a Charter Member of the Exchange Club of Millington, Tennessee, where she served and was recognized as an Outstanding Club Secretary by the National Exchange Club. Mrs. Tickle was recognized as the recipient of the Hand and Heart Award of the Millington Chamber of Commerce. Kathryn was actively involved in political events surrounding the Atoka Community. She was a regular attendee of the First United Methodist Church of Millington. She volunteered for the PTA in the children’s schools, served in the Ladies Auxiliary of the Memphis Home Builders Association, was a member of the Eastern Star, and honorary member of the USS Lexington annual reunion. Kathryn enjoyed coloring flowers, birds, and paisley mandolins artwork; time spent with family playing cards; riding the pontoon boat at the family retreat on Pickwick Lake; and traveling with her husband, sister and brother-in-law. Loving wife of 67 years, proud mother, grandmother and great grandmother, she was preceded in death by her beloved husband, Jack, parents Anna and Mike Rebich, brothers Mitchell, Ralph, George, Sam; and sisters Diane Pearce and Mary Johnson; granddaughter, Catherine Sullivan and great granddaughter, Jessica Tickle. Survivors include her loving sons: Jack Ronald (Ronnie) and wife Vicki Tickle of Germantown; Diane and husband Ken Sullivan of Madison, Mississippi and Atoka, Tennessee; James and wife Debbie Tickle of Leesburg, Florida; David Tickle of Millington; Charles “Kookie” and wife Cindy Tickle of Atoka; 9 grandchildren; 10 great grandchildren; and numerous nieces and nephews. Honorary pallbearers include the members of the Senior Adult Department of the First United Methodist Church of Millington. Pallbearers are her grandsons. In Lieu of flowers, memorials may be given to First United Methodist Church, 8029 Wilkinsville Road, Millington TN 38053 or a charity of your choice. To view the webcasted service click on the following link: http://webcast.funeralvue.com/events/viewer/36401

The family of Kathryn Rebich Tickle created this Life Tributes page to make it easy to share your memories.

Send flowers to the Tickle family.