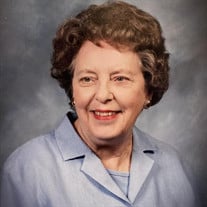 Mrs. Kathleen Elbrecht entered eternal life with Christ on January 16, 2022 after a brief illness. She died peacefully at home in the care of beloved family members. She was born in Baton Rouge LA, the first of three children, to Ross Vernal and Cecilia Louise (née Pirrung) Prewett. She was subsequently raised in Memphis and graduated from Immaculate Conception HS, class of 1944. She attended the University of Alabama and Louisiana State University before obtaining her bachelor and master degrees in education from Memphis State University. Kathleen worked over 30 years as a school librarian and resource specialist in the Memphis City schools, retiring from White Station Junior High in 1991. Upon retirement, Kathleen participated in many activities, clubs and organizations including Holy Rosary Parish Altar Society, a local garden club, the Friendship Force and Delta Kappa Gamma. She was a long time docent at the Dixon Gallery beginning in 2004. Kathleen was an avid reader and played bridge weekly with dear friends. Most importantly Kathleen was devoted to her family. On July 22, 1950, Kathleen wed Robert Allen Elbrecht of St. Louis, MO at St. Peter’s Church. Tragically Robert died 3 years later leaving her to raise two sons. Robert Allen Jr. with whom Kathleen resided until her passing and Martin, who resides in Lake Peekskill, NY with his wife Elise. Kathleen was the grandmother of Andrew Elbrecht of Northvale, NJ and Thomas Elbrecht of Salt Lake City, Utah. Kathleen was aware that she became a great grandmother on January 15, 2022 when Andrew and his wife Holly’s son Charlie David was born. Kathleen also leaves behind her younger brother Ross Vernal Jr, and his wife Patsy of Jacksonville, FL. Preceding her in death by two months was her younger sister Roseanne P. Koch of Hernando, MS. She is also mourned by her surviving nephews: Mark and Steve Koch and Steve's wife Vanessa, her cousin Eddie and Sally Ramsey and their children and her brother's children: Lisa Day, Ross Andy, and Cathy Prewett. A Funeral Mass for Mrs. Elbrecht will be held on Monday, January 24, 2022 at 10:00am at Holy Rosary Catholic Church with burial to follow at Memorial Park Cemetery. The Elbrecht Family will receive friends on Sunday, January 23, 2022 from 5:00pm - 7:00pm at Memorial Park Funeral Home.

Mrs. Kathleen Elbrecht entered eternal life with Christ on January 16, 2022 after a brief illness. She died peacefully at home in the care of beloved family members. She was born in Baton Rouge LA, the first of three children, to Ross Vernal... View Obituary & Service Information

The family of Kathleen Canty Elbrecht created this Life Tributes page to make it easy to share your memories.

Send flowers to the Elbrecht family.