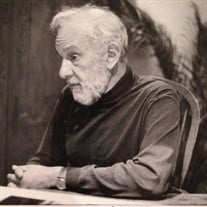 Julien Jefferson Hohenberg, aged 94, passed away peacefully on January 16, 2021 at home surrounded by the love of his children and grandchildren. He was born in Montgomery, AL to Dorothy and A. Elkan Hohenberg on July 3, 1926 and moved to Memphis when he was seven. After finishing Culver Military Academy, he graduated from Yale University in 1946 at the age of nineteen with dual degrees. After Yale, Julien immediately went to work at the family firm, Hohenberg Brothers Cotton Company. He took to the business with gusto, making his own mark in a short time living and working in Central America and Mexico and travelling on business to Brazil, Europe, Asia, any place where cotton is grown, bought or sold. After working in the business for eleven years, he entered the Master’s program in International Relations at the Fletcher School of Law and Diplomacy with a concentration in Asian Studies, sensing future growth and opportunity in that region. As a 21-year-old, Julien had been in Shanghai on business shortly before the city was overrun by Mao’s forces. Then twenty-five years later in 1973, he was one of the first American businessmen allowed into Red China after Nixon opened up relations the previous year. He did not wait for official permission or a US trade mission trip but instead obtained a visa on his own initiative by visiting Beijing’s “liaison office,” located at that time in a Washington DC hotel, since there was not even an embassy yet with relations still in the process of being formalized. Julien was a dreamer and a wild man, fearless, an explorer, a seeker, a deep drinker of the Pierian Spring – he was always ahead of his time. He viewed life as “the hero’s journey” and drew inspiration wherever he could find it: poetry, history, a nursery rhyme, a child’s face, a slow-moving stream. Julien was a life-long student and viewed himself as a teacher. He loved to dance. Family was everything to him. Artists, poets, musicians, and others were drawn to his crazy energy and his brilliant mind. He was a friend and a patron and an important ally of the photographers William Eggleston as well as William Christenberry and the producer Willie Mitchell, who were close friends and co-conspirators for over twenty-five years. Allen Ginsberg was a friend, as was Jimmy Carter. Lee Baker, Sid Selvidge, Joyce Cobb and others were very important in his life as well. As Hubbie Turner said, “He had a great love for Memphis music and the musicians.” Along with his first wife Mary, he was an early and ardent supporter of the Civil Rights movement in Memphis starting in 1964, often working hand in hand with friends Vasco and Maxine Smith, A.W. Willis and others. Julien is survived by his six children, Juliet Wischmeyer, Laetitia Hohenberg, Adam E. Hohenberg, Mary M. G. Hohenberg, Jason Hohenberg, and Rachel Hohenberg, and nine grandchildren. He leaves two former wives, Mary Mhoon Walker and Sarah Hohenberg, and was predeceased by his loving and caring wife Elizabeth Ford Hohenberg. Due to COVID, Julien will be laid to rest in a private family-only graveside service at 10:00 a.m. (CST) on Tuesday, January19th, 2021. Live streaming available here: https://www.messageinabottleproductions.com/julienhohenbergservice The family asks that memorial gifts be given to benefit the Memphis Public Library. For information on how to make a donation in Julien’s memory, please email [email protected] or to send a check, simply mail a donation to the Memphis Library Foundation at 3030 Poplar Ave, Memphis, TN 38111 with “In Memory of Julien Hohenberg" in the memo line.

Julien Jefferson Hohenberg, aged 94, passed away peacefully on January 16, 2021 at home surrounded by the love of his children and grandchildren. He was born in Montgomery, AL to Dorothy and A. Elkan Hohenberg on July 3, 1926 and moved to Memphis... View Obituary & Service Information