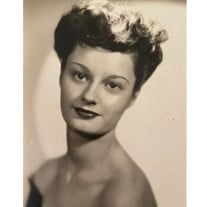 Joyce Maudeen Gwaltney Hall was born at 3:15am on May 3, 1929, in Hattiesburg, Mississippi, to Robert Ernest Gwaltney and Gladys Hammet Gwaltney. She passed away surrounded by family at 2:45am on Aug. 20, 2021 in her Memphis, Tennessee home from complications of cancer. When Joyce was two years old, her family moved to Memphis, where she lived the rest of her life. Since her mother had contracted tuberculosis of the eyes, Joyce had to grow up faster than most children, assuming the duties of an adult in order to help her mother and father as much as possible. Her father, who had been a school teacher, instructed her in math and bookkeeping, and he emphasized the importance of organization and how to maintain exact records, a practice she kept up her whole life. Even though she was an only child, she shared great times with her several cousins and neighborhood friends. She attended Messick Elementary and High School and graduated in May 1947. Early in high school, Joyce met her husband-to-be Richard Eugene Hall at Union Avenue Methodist Church. Richard left Memphis in 1942 for the Navy and returned in 1946. That same year, they both happened to be back at the same church, and through an adorable accident, they knocked each other down in the hallway. As he picked the papers he had caused her drop, their eyes met. Delighted with her beauty, he happily exclaimed, “Well, you were in pigtails the last time I saw you!” They started dating immediately, and were married on June 7, 1947. Even though they never made a lot of money, they always found a way to travel and experience the United States the best way they could. They frequently went to the northern Mississippi man-made beach called Maywood Beach, and visited cities such as Panama City, New York City, Chicago, Albuquerque, Washington D.C., New Orleans and others, but Joyce said her favorite of all was San Francisco. When they couldn’t travel, they used to love having picnics by the waterfront in the park in downtown Memphis. She always said that “sunsets last longer down by the river.” Richard died four days before their 64th wedding anniversary in June 2011. At the age of 41, Joyce and Richard were involved in a fatal car accident that was caused by a drunk driver who ran a red light at the intersection of Rhodes Avenue and Getwell Road. Richard’s best friend, the driver, was killed, while Richard himself was thrown from the car. Joyce was pinned in the backseat. She may have died at the scene, if luck hadn’t put them across the street from a fire station—she was saved by the firefighters of House No. 30 and their quick action with the Jaws of Life. She recovered several months later from a shattered pelvis, fractured femur, broken ribs, a punctured left lung, broken back and shoulder, severe head trauma, multiple face lacerations, the removal of her left vastus lateralis, and the remains of glass shards, some of which were left in her body permanently. Joyce learned to adapt and make sacrifices, lessons that came from living through the Great Depression and five major wars. She witnessed amazing technological advances and embraced them all. She had many jobs, including as a county clerk for license and registration, a bookkeeper, a secretary and a typist. She was so talented with a typewriter that, for additional income, she would charge University of Memphis students a reasonable fee to type up their college papers. At one point, she was an aspiring model and opera singer. She was a trained soprano and used her gift to sing in her church choir at Union Avenue Methodist Church in midtown Memphis, where she was a member for 75 years. After the church (which was on The National Historic Registry) was demolished and replaced by a CVS in 2011, she joined the congregation of Colonial Park United Methodist Church in East Memphis. Joyce taught her family what true strength is, how to have patience and be kind, and how to enjoy life through the joyful times as well as the grim. Her family and everyone who knew her will greatly miss her warm smile, beautiful voice, and sweet spirit. She is survived by two children, Brenda Hall Jobe (Paul) and David Wayne Hall (Ann), five grandchildren, Brian Russell Jobe (Carri), Lauren Alana Jobe, Megan Hall Nunn (Steffan), Devon Hall Dunehew (Sean), and Andrew David Hall (Amanda), and twelve great-grandchildren, Russell Jobe, Houston Jobe, Walter Jobe, Ava Nunn, Cecelia Nunn, Eli Nunn, Katherine Nunn, Robert Dunehew, Carolina Dunehew, Rosalie Dunehew, Hayden Hall, and Martin Hall. In lieu of flowers, please send any memorials or donations to Colonial Park United Methodist Church and St. Jude's Children's Research Hospital. https://www.stjude.org/donate/donate-to-st-jude.html All services are private at this time.

Joyce Maudeen Gwaltney Hall was born at 3:15am on May 3, 1929, in Hattiesburg, Mississippi, to Robert Ernest Gwaltney and Gladys Hammet Gwaltney. She passed away surrounded by family at 2:45am on Aug. 20, 2021 in her Memphis, Tennessee home... View Obituary & Service Information