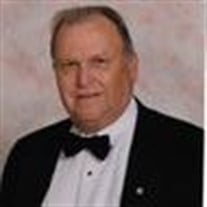 Joseph C. Orsak, 91, son of Adolph and Marie Orsak, passed away peacefully January 14th in Boca Raton, FL. He was preceded in death by his parents, and by his loving wife of 65 years, Patricia Viau Orsak. He was also preceded in death by his brother Adolf Orsak, Jr. He is survived by six children: Joseph Orsak Jr.(Josephine)-Syracuse NY; Rev. David Orsak-Martin TN; Darlene Myers(John)-Corpus Christi TX; Karen Orsak(Anthony Coulter)-Boca Raton FL; James Orsak(Sonya)-Chattanooga TN; and Patricia Posey-Germantown TN. He leaves behind ten grandchildren and five great grandchildren. He is also survived by his three sisters: Marie Alkema(Andrew); Elizabeth Klock; and Rose Moen(Wendell); as well as numerous nieces and nephews. Joe was born August 28, 1928, in Port Arthur, TX. He grew up in Corpus Christi, TX, graduated from College Academy High School, and later received his Bachelor of Science degree in Civil Engineering from Syracuse University. He was an Army Sergeant in the 63rd Field Artillery Battalion, stationed in Japan during the Korean Conflict. His 30+yrs career as a construction project manager with Firestone Tire & Rubber Co. took him all over the world, with projects in Canada, Italy, Australia, and the United States. After moving to Bartlett, TN, he worked for the Memphis Airport Authority, and for Askew, Nixon and Ferguson (CM Plus+) as Architect Representative on numerous expansions for Federal Express Memphis. He was an active parishioner of St. Ann Catholic Church and a 4th Degree Knight of Columbus. On May 30th, 1951, Joe married the love of his life, Patty. After her passing, he moved to Boca Raton, FL, where he lived happily with his daughter Karen and his son-in-law Tony. He eventually became a resident of the Atrium at Boca Raton, where he leaves behind many friends. Together again, Joe and Patty now rest peacefully in the arms of their Heavenly Father, whom they dedicated their lives to serving. Visitation will be held Monday, January 20th 5:30-8pm in the sanctuary of St. Ann Catholic Church, 6529 Stage Rd, Bartlett, TN. A Mass of Christian Burial will be held Tuesday, January 21st, 10:30am, also at St. Ann Catholic Church, with burial immediately following at Memorial Park Cemetery. In lieu of flowers, the family requests that donations be made to the Knights of Columbus-Council 7170, the St. Ann Building Fund, or to St. Jude Children’s Research Hospital. Funeral arrangements have been entrusted to Memorial Park Funeral Home and Cemetery, 5668 Poplar Ave., Memphis, TN 38119 (901)767-8930. "A Fitting Farewell for Everyone".

The family of Joseph Cyril Orsak created this Life Tributes page to make it easy to share your memories.

Send flowers to the Orsak family.