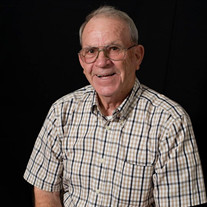 Johnson Denver Spicer Jr. 92, of Memphis, passed away on Tuesday October 20, 2020, in his home. Funeral services will be held at Oak Crest Baptist Church located at 3600 Ardmore Street, Memphis TN, 38127 on Thursday, October 29, 2020 at 12:00 p.m. Visitation will be held prior to the service starting at 10:30 a.m. until 12:00 p.m. The graveside service will follow at 2:30 p.m. at Memorial Park Cemetery located at 5668 Poplar Avenue, Memphis, TN, 38119. Johnson Spicer also known as “JD or Junior” served in the United States Navy for 26 years and retired as a Chief Petty officer. He also retired from K-mart after 10 years as a department manager of Home Improvements. He was also a carpenter, a pipe fitter, a master welder, and a mason. He is preceded in death by his wife Frankie McRee Spicer, his son Gary Spicer. He leaves two daughters, Kimberly Carter (Davie), and Yonna Terry (David), three grandchildren, Dustin Carter (Kristen), Joshua Shemwell (Katelyn)and Jessica Johnson (Caleb): five great-grandchildren, Abigail, Lorelai, Amelia, Memphis, and Alexis. The family requests that in leu of flowers please make donations in his honor to Oak Crest Baptist Church which he has been a member of 12 plus years. His church family took such good care of him and we appreciate everything they did for him.

The family of Johnson Denver Spicer Jr. created this Life Tributes page to make it easy to share your memories.

Johnson Denver Spicer Jr. 92, of Memphis, passed away on Tuesday...

Send flowers to the Spicer family.