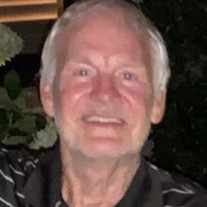 John MacLeod Wagner passed Sunday January 31, 2021 of complications suffered from a fall. John was born in Danville, PA in 1947 where he graduated from high school in 1965 serving on its grid iron and basketball team. He graduated from Bucknell University in 1969 and held an MBA from the University of Pennsylvania’s Wharton School. He was also a Second Lieutenant in the Army Reserve after college. John married his college sweetheart Marcia Matter and began his career as a CPA with Coopers & Lybrand in Philadelphia. After the birth of their son Stephen in 1974, he took a position with National Gypsum in Buffalo, NY and then in Dallas, TX where their second son, Justin was born in 1976. The family moved to Germantown in 1984 where John took a position with VVP America as its Vice President of Finance and where he remained until retirement. He was not one to sit still and after his retirement, he and his son Justin started the Germantown Hardware store and the Germantown Car Wash. He has been heavily involved on boards and committees in the Germantown United Methodist Church and volunteered significant hours in assisting the youth at the Holy Community church in Memphis and the homeless at A Place at the Inn also in Memphis. He was active with the City of Germantown and served the City’s Economic Development Commission, Financial Advisory Commission, and the Great Hall Committee. John is survived by his wife Marcia, his son Justin and two wonderful grandchildren, Addie Grace and Miller and four brothers that were close to him, Ollie, Steve, Scott and Andy. He was predeceased by his son Stephen who died of pancreatic cancer. John, had a great sense of humor and was a loving husband, father, brother, and friend. He will be missed greatly by all familiar with his warm smile, can-do-spirit, and care for the community. The visitation will be held at from 5:00 p.m. to 7:00 p.m. Monday, February 8th at Memorial Park Funeral Home. The service will be at 1:00 p.m., Tuesday, February 9 at Germantown United Methodist Church. Interment will be in Memorial Park Cemetery. Please click the link to view the service online at Germantown United Methodist Church. https://www.germantownumc.org To view the tribute slideshow, please click the link below: https://www.tributeslides.com/tributes/show/KR67B53BSFCQZKJS

John MacLeod Wagner passed Sunday January 31, 2021 of complications suffered from a fall. John was born in Danville, PA in 1947 where he graduated from high school in 1965 serving on its grid iron and basketball team. He graduated from Bucknell... View Obituary & Service Information

The family of John M Wagner created this Life Tributes page to make it easy to share your memories.

Send flowers to the Wagner family.