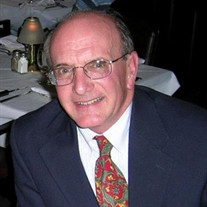 JOHN DAVID TUCKER III, born on August 5, 1942 in Memphis, Tennessee passed away on Sep 6, 2021 in Suwanee, Georgia. He is preceded in death by his parents, John David Tucker II and Sara Rose (nee Sullivan.) He was a loving husband, father, grandfather, brother and uncle. He is survived by his wife of fifty-six years, Marianne (nee Ball); his son Robert Tucker (Sara) and his grandson Luke; his daughter Elizabeth Obrochta (Andrew) and his granddaughters Lilian & Payton; his brother Hugh Tucker (Paul Thomas); his sister Barbara Harmon (Tom) and his nephews Ryan & Brad and niece Jessica; and his brother Donald Tucker (Annie) and his niece Ann Marie Hamrick and nephew John Donald. David graduated high school from Bartlett High School then graduated Purdue University with a degree in Chemical Engineering. After graduation, David and Marianne moved to several states and a different country including: St. Louis, MO, Alvin, TX, Omaha, NE, ARUBA, Netherland Antilles, Woodward, OK and finally settling back in Memphis, TN. He worked for over 40 years as an Engineer for Quaker Oats, Monsanto, & WR Grace before his retirement. David was a member of Germantown United Methodist Church and active in the Fellowship Forum Sunday school class, and enjoyed singing in the choir every Sunday. David also was a member of a local barbershop group, taking part in concerts and competitions for several years. David and Marianne moved to Suwanee, GA to be near family. In lieu of flowers, the family suggest donations to Germantown United Methodist Church or the Alzheimer Association. The family will receive relatives and friends on Saturday, September 25 at 9:00 a.m. with a memorial service to follow at 10:00 a.m. all in the Riverside Chapel of Memorial Park Funeral Home and Cemetery 5668 Poplar Ave Memphis, TN 38119 Click the link below to view the webcasted service: http://webcast.funeralvue.com/events/viewer/60665/hash:C8C151C6E6A4AFC4

JOHN DAVID TUCKER III, born on August 5, 1942 in Memphis, Tennessee passed away on Sep 6, 2021 in Suwanee, Georgia. He is preceded in death by his parents, John David Tucker II and Sara Rose (nee Sullivan.) He was a loving husband, father,... View Obituary & Service Information

The family of John David Tucker III created this Life Tributes page to make it easy to share your memories.

Send flowers to the Tucker family.