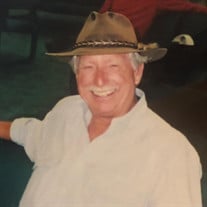 John St. John, born June 18th, 1936 died August 31st at the age of 84. Survived by his wife of 44 years Linda Komdat St. John, sons John St. John Jr, Joe St. John, Jay St. John, and daughter Jessica St. John Marshall as well as his 6 grandchildren Luke, Fisher, Harper, Harriett, Abigail and Arden, and his sister Judy “Red” St. John Grisso of Fayetteville Arkansas and was preceded in death by his sister Joan St.John Curtner. John, known to many of his friends as Saint, traveled the world, and made a lasting impression on many he met. He had a deep reservoir of experience to tell a tale, both true and tall. A golden glove winner, honored army veteran, Captain of the furniture industry, John was insatiably curious, always reading and gathering ideas. He spent his business career following in his father’s footsteps, Joe St. John of Memphis Furniture. John left Memphis Furniture in the early 1960s to start, and run three more companies in his 54 year career. He travelled the world designing, manufacturing, and marketing furniture for the country’s largest retailers. Saint never missed an opportunity to entertain a crowd, to make someone laugh, or to make a friend out of a stranger. He was an avid fan of Shakespeare, Churchill, Lord Acton, words, books, a good hat, better boots, a good bottle of red, an audience.... He was “The Magic Man” to some, Saint, Juan, Big Juan, Bad Dad, Gwamps... the epitome of the wearer of many hats. He taught his daughter how to tend to tomatoes, his sons how to hunt, all of his children how to shoot, be tough, remain curious, love the outdoors, and forge their own paths. Saint had a story to tell everyone, and everyone who knew him has a story to tell about Saint. His heart was in the Delta, The Rocky Mountains, and his hometown of Memphis.

The family of John St. John created this Life Tributes page to make it easy to share your memories.