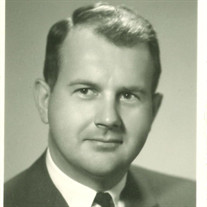 On Monday, March 15, John Thomas “Jack” Saatkamp, loving husband, father and grandfather, passed away in Memphis, Tennessee, at age 89 after complications from surgery. Jack was born on September 4, 1931, in Nokomis, Illinois, to Julius and Hazel (Cannon) Saatkamp. After a stint in the US Navy on the USS Taberer during the Korean conflict, he received his B.S. in Chemistry from Eastern Illinois University in 1958. On a trip home one weekend from school he was invited to meet the pretty young school teachers who had just moved to town. One of those teachers happened to be a red-headed Nancy May whom he married on March 1,1959. Jack and Nancy raised two children, Andrew and Kathryn, and together they followed Jack’s career from Chicago to Milwaukee, Baltimore, New Orleans, Charlotte and finally Memphis. He retired in 1996, and left the cold, wet winters for warmer, sunny days in Oro Valley, Arizona. Jack was an avid golfer during this time and loved sharing stories with old and new friends. He re-retired to Memphis in 2018, most likely to expand his audience, but more importantly to be near family. He enjoyed participating in American Legion meetings and serving on the board at the Town Village Audubon Park, and rarely missed his grandchildren’s sports games. His mischievous smile, gift of gab, and solid advice will be missed by all who had the good fortune to cross his path. He is survived by his wife of 62 years, Nancy, son, Andrew Saatkamp (Cynthia) of Memphis, and daughter, Kathryn Saatkamp Angioletti (TJ) of Menlo Park, California. PopPop’s friends will miss hearing him brag about his grandkids, Mia, Dominic, Bronywn and Jackson. In lieu of flowers, the family asks that donations be made to the American Legion Post 250, PO Box 38244, Germantown, TN 38183 or Honor Flights for Veterans at https://www.honorflight.org/ or a charity of the donor's choice. There will be a Celebration of Life service on Sunday, March 21 at 1:00pm at Memorial Park Funeral Home, 5668 Poplar Avenue in Memphis. To view the webcasted service click the link below: http://webcast.funeralvue.com/events/viewer/50620