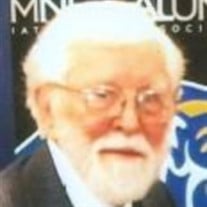 Dr. John Richard Petry, 94, of Memphis, TN, passed away Sunday, December 12, 2021. John was born in Columbus, NE on November 28, 1927 to Arno Louis Petry, Sr. and Audrey Ethel Gibbon Petry. He earned a B.A. (1948) and M.S. (1953) from Hardin-Simmons University, a B.D. from Southwest Baptist Theological Seminary (1953), and a Ed.D. from Peabody College of Education, Vanderbilt University. On July 20, 1956, he married Frances Elizabeth Cunningham from Canyon, TX. He and Frances were married for 59 years until Fran's death in November 2014. Dr. Petry was a member of Colonial Baptist Church. He was licensed to preach and was an ordained deacon. He was an associate professor with the University of Memphis from 1967 until 2009. During that time, he was president of the Academic Senate for five terms, president of Kappa Delta Pi, and a Hall of Fame College of Education inductee. He was an executive board member of the International Montessori Society and the Memphis Union Mission. John received an Outstanding Tennessean Award in 1976 from former Tennessee Governor Ray Blanton. In addition to his parents and his wife, Frances, he was preceeded in death by his siblings, Arno Louis Petry, Jr, Arthur Gibbon Petry, Gibbie Eloise Froehlich, and Phyllis Ann Cavarretta. He is survived by his sister, Patsy Culver and her husband, Greg; by his daughter Elizabeth Petry-Welch, her sons, John Michael Welch and James Patrick Welch and her granddaughter, Jaina Elaine Welch; by daughter Rebecca Petry Pitner and her husband, Shannon, and her son, John Thomas Pitner and his wife, Hannah. Funeral Services will be at Memorial Park Cemetery.

The family of Dr John Richard Petry created this Life Tributes page to make it easy to share your memories.

Send flowers to the Petry family.