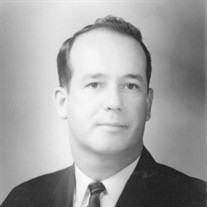 John Thomas Perryman, age 88, of Memphis passed away on Tuesday, June 23, 2020 at his home. He was born December 10, 1931 in Memphis, TN to the late Roy Clifford and Jessie Sallie Smith Perryman. He married Kathrine Vincent on July 20, 1968 at St. John’s United Methodist Church, creating a union of teamwork, love and joy for over 51 years. He was a 1949 honors graduate of Treadwell High School and a 1955 cum laude graduate of Memphis State College (now the University of Memphis) with a major in accounting. He was also a letterman on the golf team and a member of the Pi Kappa Alpha fraternity. He was commissioned into the Air Force as a 2nd Lt. after completing the ROTC program at Memphis State College. He went on active duty in February 1956 and became an Air Force pilot, serving in the Strategic Air Command with the air refueling squadron at Little Rock, AR and Bermuda. After leaving the Air Force, he enlisted in the Tennessee Air National Guard flying C-97s and C-124s, obtaining the rank of Lt. Col. and retiring in 1977. He became a Certified Public Accountant in 1978. John worked as a Certified Internal Auditor for First National Bank (now First Horizon) and as an accountant for Memphis Mental Health Institute, retiring in 1997. John loved school and never wanted to miss a day. He was smart, quiet, patient, humble, kind, easy-going and generous. John was a huge Memphis Tigers fan. He loved his family and was always positive and supportive. John never failed to tell his family to have a good time when heading off on an outing or adventure. John was the Best of the Best. He was the wind beneath our wings. He leaves his wife, Nancy Kathrine Vincent Perryman; his daughter, Octavia Kathrine Perryman Ashby (Michael); his son, J. Vincent Perryman and grandson, Samuel Luke, and a large extended family of sisters and brothers-in-law, nieces, nephews and their children. He was preceded in death by his parents and siblings: Conway, Virginia, Roy and Charley Mark. The family will have a private gathering at Memorial Park Funeral Home Mausoleum Rotunda at 2:00 pm on Tuesday, June 30, 2020 with burial following. In lieu of flowers the family requests that memorials be made to a charity of the donor’s choice. Please visit www.memorialparkonline.com to leave condolences for the Perryman family.

John Thomas Perryman, age 88, of Memphis passed away on Tuesday, June 23, 2020 at his home. He was born December 10, 1931 in Memphis, TN to the late Roy Clifford and Jessie Sallie Smith Perryman. He married Kathrine Vincent on July 20, 1968... View Obituary & Service Information

The family of John Thomas Perryman created this Life Tributes page to make it easy to share your memories.

John Thomas Perryman, age 88, of Memphis passed away on Tuesday,...

Send flowers to the Perryman family.