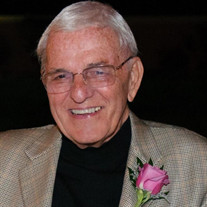 On Saturday May 2nd, John (“Lee”) Leroy Petty passed away peacefully in Memphis, TN at the age of 86. He was a loving husband, father, brother and grandfather and will be missed greatly. Lee was born on May 24, 1933 in Memphis, TN to Maurice and Hubert Petty. He proudly claimed his best education came from Bruce School and Tech High in Memphis, TN. He was a proud businessman and entrepreneur of 59 years. On January 1st, 1952, he married Barbara Jeanne Pope. They had two children, Jim and Cathy. Lee had a passion for his business and entrepreneurship. He was a Maverick of his industry and one of the very first founders. He had a knack for finding solutions to problems and would start numerous companies to fulfill those needs. He believed that he always had to be doing something new. He cared greatly for all of his employees and always made a point to take care of them, even if it meant a personal sacrifice. Lee believed in hard, honest work and that if we could all “press on and push forward,” that we could solve any problem that humanity faced. Lee was known for his sharp wit, ability to tell a great story and joke, and incredible intellect. He could do math in his head faster than you could get the result from a calculator. Lee was also known for being very charitable. He helped All Christian Denomination Center gain a new church home and was very fond of Dr. Morris and the amazing work performed at the Church Health Center. Lee will be lovingly remembered by his wife of 68 years, Barbara, their son Jim (Barbara), and his sister Susie (Ken). Lee will also be fondly remembered by his two grandchildren, Nathan (Kimberly) and Katie (Jason) and his three great grandchildren: William, Wyatt, and Harper. He will also be missed by his nephew Tim (Iskra) and many friends and colleagues. Lee was preceded in death by his parents, brother Charles, and daughter, Cathy. A private funeral service will be held for the family Wednesday, May 6th at Memorial Park Funeral Home and Cemetery. In lieu of flowers, the family asks for donations to be made to The Church Health Center at 1350 Concourse Ave Suite 142, Memphis, TN 38104.

On Saturday May 2nd, John (&#8220;Lee&#8221;) Leroy Petty passed away peacefully in Memphis, TN at the age of 86. He was a loving husband, father, brother and grandfather and will be missed greatly. Lee was born on May 24, 1933 in Memphis,... View Obituary & Service Information

The family of John "Lee" Leroy Petty created this Life Tributes page to make it easy to share your memories.

Send flowers to the Petty family.