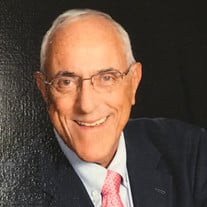 John Bennett Kinch II passed away February 4, 2020. Beloved husband of Valerie Kinch. Loving father of Shelly Brannan (husband David), John B. Kinch III (wife Shelly), Robin Wiener (husband Mark) and Tracy Henderson (husband James). Beloved grandfather of Stephanie Brannan, D. Carlos Brannan, Selena Brannan, Taylor Kinch, Alivia Kinch, Benjamin Wiener, Sam Wiener, James Henderson and Katherine Henderson. Dear brother of Geof Kinch and Susan Fish. Dearest son of John Bennett Kinch I and Marie Kinch. Loving uncle of Steven Eckert, Peter Eckert, Karen Heman, Marlene Rickert and Robert Eckert. John worked at Pratt and Whitney in East Hartford, CT for 35 years. He was a very well respected Sales Director that contributed to the airline industry across the world. His major account, while at Pratt and Whitney, was Northwest Airlines and he also supplied engines to many other airlines around the world. After Pratt and Whitney John joined FedEx in Memphis,TN. He started his 23 years with FedEx, selling Hush Kits around the world to different airlines. He became a member of the President's Club. John also supervised the operational needs and requirements of Air Ops for FedEx during the opening of the Guangzhou Hub. John’s most notable contribution while he was at FedEx was his passion for the safety and well being of his fellow employees. He created an all volunteer disaster and recovery program intended to prepare FedEx for any possible disaster. He then spearheaded a program for Automated External Defibrillators (AED) to be placed at FedEx for employee’s well being. John was awarded the FedEx Five Star Award for his efforts on the program. John was a ranked amateur tennis player.He was Vice-President of the Connecticut Jaycees. He was an Eagle Scout and a Vigil member of the Order of the Arrow. He attended the University of Miami Florida. John directed the youth football program for 10 years in Willimantic, CT. He loved playing golf. He loved traveling both domestically and internationally, especially with his wife Valerie. John thoroughly enjoyed the beaches in Rhode Island, where he would spend time with his family and fly stunt kites. John was an active member and usher at The Church of the Holy Spirit. The family will receive relatives and friends on Monday, February 17, 2020 from five o'clock in the afternoon until eight o'clock in the evening at Memorial Park Funeral Home, 5668 Poplar Avenue in Memphis. There will be a funeral Mass on Tuesday, February 18 at eleven o'clock in the morning at Church of the Holy Spirit, 2300 Hickory Crest Drive in Memphis. In lieu of customary remembrances, the family requests that donations be made in Mr. Kinch's name to the American Organ Transplant Association.

The family of John Bennett Kinch, II. created this Life Tributes page to make it easy to share your memories.

Send flowers to the Kinch, family.