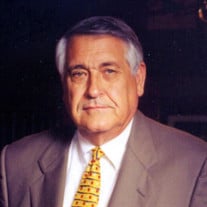 Dr. John McIllwain Dobson, 86, of Memphis, passed away on Tuesday, May 25, 2021. He was preceded in death by his parents, Lawrence "Jimmy" and Emma Lou Dobson. He is survived by his wife, Carolyn Dobson, three children, Kim Dobson (Rick Olson), John Dobson Jr. (Carolina), Suzy Dobson Bell, grandchildren, Taylor Dobson Bailey (John Patrick), Fabiana Palet, McKenzie Dobson, a sister, Emily Dobson Childress and her husband Harold and several nieces, nephews, and great nieces and nephews. Dr. Dobson graduated from Dobyns-Bennett Highschool followed by Vanderbilt University where he was an active member of Sigma Nu Fraternity and University of Tennessee Medical School in 1960 where he was an active member of Phi Rho. During his last year at medical school, he contracted TB and spent that year at the hospital. While there, he met a Radiologist from Heacock-King which became MRPC who encouraged him to do a residency. He followed the advice and was offered a position at Memphis Radiological Professional Corporation. At that time in 1965 there were five members and when Dr. Dobson retired in 1998 there were forty-eight Radiologists. During that time, he opened the Departments of Radiology at Methodist South, Methodist Germantown and Methodist North. In his tenure with Methodist LeBonheur Healthcare, Dr. Dobson was awarded several leadership positions to name a few - Past President of MRPC and Chief of Staff as well as serving on several boards. In 1997, he was one of the recipients of the Methodist Healthcare Foundation Living Awards which honored him as a "Fellow". He was a member of Central Church. Dr. Dobson was generous to all his family, friends, acquaintances and always treating everyone with dignity and respect. He was fair in his judgments being a cohesive part of hospital management, evaluating patient needs, administrative goals, and employee performance. He was a dignified and humble leader who was admired by all. He was always considerate of others often saying, "No matter how thin you slice the bread; the slice always has two sides". We know his faith in Jesus Christ has led him to be with the greatest physician of all. His extra-curricular activities included but not limited to; hunting, fishing across the US, boating, scuba diving, flying his airplane and learning to weld at Moore Tech (William R. Moore College) with friends. Often, he would fly to the outside surrounding areas that had smaller hospitals that needed x-rays to be read. The family will receive relatives and friends on Friday, May 28 from 5:00 pm until 7:00 pm at Memorial Park Funeral Home, 5668 Poplar Avenue in Memphis. There will be a graveside service on Sunday, May 30 at 1:00 at Oak Hill Memorial Park, 800 Truxton Drive in Kingsport. In lieu of flowers, the family requests memorial contributions to be made to the Church Health Center, 1350 Concourse Ave Suite 142, Memphis, TN 38104. The family express sincere gratitude to Crossroads Hospice and Palliative Care.

Dr. John McIllwain Dobson, 86, of Memphis, passed away on Tuesday, May 25, 2021. He was preceded in death by his parents, Lawrence "Jimmy" and Emma Lou Dobson. He is survived by his wife, Carolyn Dobson, three children, Kim Dobson (Rick Olson),... View Obituary & Service Information

Dr. John McIllwain Dobson, 86, of Memphis, passed away on Tuesday,...