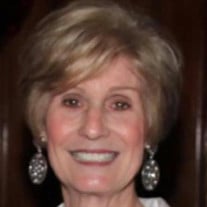 JoAnn W. Zarfoss, age 79 of Germantown, TN passed peacefully on February 16, 2021 after a long battle with dementia. She was born November 20, 1941 in Washington DC, the daughter of John and Ann Wimmel. She was preceded in death by her father, John Wimmel, mother, Ann Wimmel and brother, James Wimmel. She is survived by her loving husband, William Zarfoss of Germantown, TN; daughter, Kimberly (Scott) Hansen and their daughters, Erica, Emily and Erin of Collierville, TN; her son, William (Stacy) Church and their children, Anna, Lila and Tyler of Tracy’s Landing, MD; stepson, David (Katy) Zarfoss and their son, Jacob of Gainesville, GA; sister, Janet (John) Adams of Memphis, TN; brother, John (Sally) Wimmel of Silver Spring, MD; and several nieces and nephews. JoAnn graduated from Roanoke College in Virginia, with a major in Education and a minor in Psychology. During her time in college, she was nominated to the May Court and crowned May Queen. She was also actively involved as a member of Delta Gamma sorority and continued to be active as an alumna in the Memphis chapter. JoAnn was also a member of the Carnival Memphis organization, Grand Krewe of Ennead. In 1993 she was elected as Ennead’s Queen Sahara III and then she served on Ennead’s Board for two years as secretary. JoAnn had a successful career as a sales rep in the transportation industry for over 20 years. After retiring, she spent several years volunteering for the Wings Cancer Foundation and volunteered at the elementary school where her grandchildren attended. She enjoyed her lunch groups, garden club, book club, traveling with her husband and more. JoAnn was a devoted Christian and longtime member of Christ the King Lutheran Church in Memphis. Most of all JoAnn loved spending time on the water at their Pickwick lake house with friends and family, especially her husband, children, and grandchildren. JoAnn always knew that every day was a gift and lived her life to the very fullest. She was loved and respected by those she worked with as well as so many wonderful friends and will be greatly missed by all who knew her. A prayer service and celebration of life will be held at a later date. Memorial donations may be made in the name of JoAnn Zarfoss to Page Robbins Adult Day Center, 1961 South Houston Levee Road, Collierville, TN 38017, (pagerobbins.ejoinme.org/donate)

JoAnn W. Zarfoss, age 79 of Germantown, TN passed peacefully on February 16, 2021 after a long battle with dementia. She was born November 20, 1941 in Washington DC, the daughter of John and Ann Wimmel. She was preceded in death by her father,... View Obituary & Service Information

The family of JoAnn Wimmel Zarfoss created this Life Tributes page to make it easy to share your memories.

Send flowers to the Zarfoss family.