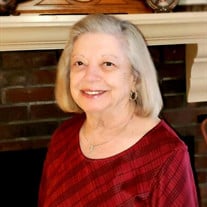 Jo Gwyndolyn May, 86, went to be with the Lord on Sunday, March 6th, 2022 surrounded by her loving family. Mom, Mama Jo or Gran, as she has been known by all her family, was born in 1935 in Newbern, TN, to Jesse Edgar and Blanche Mai Self, the oldest of two daughters. She graduated from Newbern High School in 1953, living in Ridgely, TN several years before moving to Memphis, Atlanta and Knoxville and back to Memphis during the 60’s while pursuing her career in Banking. She met and married the love of her life, Larry Allen May in 1979 and extended that love to her large, blended family, devoting her life to her children, grandchildren and now great grandchildren. She continued her career at several banks over three decades, often traveling to speak as a women’s executive leader in the industry, then finally retiring as a Vice President in 1994. She grew up in the Methodist church, but was a member of Longview Heights Baptist Church for the past 20 years, attending with her daughter, son-in-law and grandchildren. Her family cherishes their memories with their Mom, Mama Jo and Gran, and she loved them all unconditionally, doing everything in her power to make their lives better, more meaningful, and loving them through their mistakes. She was preceded in death by her parents, Jesse and Blanche; grandson, Channing; son Stuart May; and brother-in-law, Robert Joslin; survived by husband, Larry May; son, O.V. Fowler, Jr.; daughter, Shana Hyman (Bobby); sons, Reuben May, Daniel May (Crissy), and Greg May (Jennifer); grandchildren, Michaela Friend (AJ), Mayson, Jade, Shelle, Ava, Zoey, Madison, Gauge, Cara, Chassidy and Dustin; great-grandchildren, Talon Flora, Myles Brown, Jett May and Bethany Gwyndolyn Friend; sister Billie Joslin; nephews, Mark Joslin (Cindy), Kirk Joslin; grandnieces, Courtney (Chris), Chloe (Jacob), Karli (Devon); and grandnephews, Tay (Amanda) and Cannon Joslin. The visitation with family and friends will be from 1:30pm to 2:30pm until the service starting at 2:30pm, Tuesday, March 15, 2022 at Memorial Park Funeral Home, 5668 Poplar Ave. Memphis TN, 38119. In lieu of flowers, memorials may be made to LeBonheur Children’s Hospital or St. Jude’s Children’s Hospital.

Jo Gwyndolyn May, 86, went to be with the Lord on Sunday, March 6th, 2022 surrounded by her loving family. Mom, Mama Jo or Gran, as she has been known by all her family, was born in 1935 in Newbern, TN, to Jesse Edgar and Blanche Mai Self, the... View Obituary & Service Information

The family of Jo Gwyndolyn May created this Life Tributes page to make it easy to share your memories.

Send flowers to the May family.