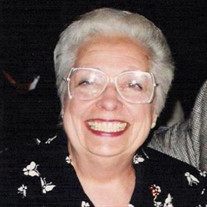 Jo Ann Kachadurian Turner was the only daughter of Krekor and Joel Kachadurian, born 7 December 1931 in Chattanooga, TN. Remarkable from the first, she excelled in ballet as a young girl, and she graced a number of local stages with her dancing. As a student at Chattanooga Central High School, Jo Ann shared her Latin textbook one day with a boy named Charlie ― and they would rarely be parted for the rest of her life. Her mother wished for her to continue pursuing dance, but Jo Ann was always one to choose her own path; she wanted to start her family, so she married Charles Turner on 29 July 1950 outside his sister’s house in Memphis, TN. Always a practical and witty woman, she would joke that the ceremony took place outside the bathroom window, also referred to as a “garden wedding.” Charlie’s naval career took the young couple to Hawaii, then to Washington, DC; by the time they returned to Memphis in 1954, they had already welcomed precious babies Alison Beth and Laurie Faith. Though they lived in a house “not much larger than a crackerbox,” Jo Ann began her tradition of hosting Sunday dinners for a dozen or more people, which would occasionally become stand-up affairs. Generations of family and friends were blessed by her cooking; all were welcome, and no one would leave hungry. Like her father before her, Jo Ann was a skilled craftsperson. She had been surrounded by Krekor’s handiwork as a child, his business being the repair of oriental rugs. Though he never spoke much of “the old country,” she always knew the strong smell of the plant dyes and the dedicated motions of his hands, as he instilled in her the industry and resilience of his Armenian spirit. Though she did not take up Krekor’s particular trade, her capabilities were boundless as her determination. She sewed, smocked, and crocheted prolifically. She could tile a floor and rewire a lamp. The stain could always be removed, the recipe perfected, the appliance repaired, the cake decorated, the wall painted; where she applied herself, she succeeded. “God gave us hands for good reason,” she would say. Krekor died when she was young, but his spirit remained with her, just as his needlepoint hung on the wall. While she led and nurtured her growing family, and cared for her mother throughout her life, Jo Ann’s indomitable spirit also led her to work outside the home. She served as Executive Assistant at prominent accounting firm Ernst & Ernst, her career there spanning 35 years. As in all things, she surely commanded respect, both for herself and for the secretaries under her leadership. This was not lost on her daughters. Alison went on to become a Certified Public Accountant herself, Laurie to be a community leader serving our immigrant and refugee population, and both loving mothers with generous hearts. “My daughters never cease to amaze me,” Jo Ann recently said. “Can they really be mine?” But of course, she’d taught them well. When she retired in 1991, Jo Ann may have entered the busiest phase of her life. She cared endlessly for each of her grandchildren and great-grandchildren, loving each one uniquely in the way that we needed. She was the listener, the defender, the mender, the provider, the advisor, the confidant ― our matriarch, our home. She shaped each of us, and we treasure her spirit; her strength and her laughter resound in us still. Jo Ann and Charles were nearing their 71st wedding anniversary when the Lord took her unto Himself on 13 May 2021. Her devoted husband salutes her memory, and her children rise up and call her blessed. Surviving are her loving husband Charles, daughters Alison Hodges (Charles) and Laurie Graves Morris (David), granddaughters Rachel Jones (Austin), Sarah Graves, Kathryn Kilboy (Jim), Kilby Yarbrough (David), and Chasity Nguyen, grandsons Cory Cotham, Jonathan Graves, and Curt Cotham, great-granddaughters Bea Cotham and Annie Jones, and great-grandson Nathan Jones. The family will receive relatives and friends on Tuesday, May 18 from 11:00 am until the time of the memorial service at 12:00 pm at Christ the King Lutheran Church, 5296 Park Avenue in Memphis. There will be a graveside service at 1:00 pm at Memorial Park Cemetery, 5668 Poplar Avenue.

Jo Ann Kachadurian Turner was the only daughter of Krekor and Joel Kachadurian, born 7 December 1931 in Chattanooga, TN. Remarkable from the first, she excelled in ballet as a young girl, and she graced a number of local stages with her dancing.... View Obituary & Service Information

Jo Ann Kachadurian Turner was the only daughter of Krekor and...