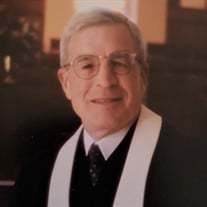 Rev. Jimmy Eddins Stubbs June 29, 1942 – October 6, 2021 The Reverend Jimmy “Jim” Eddins Stubbs, born June 29, 1942 in Vicksburg, MS to Nevius and Mary Stubbs, died October 6, 2021 in Collierville, TN. Jim is survived by his children, Brigadier General Jonathan M. Stubbs (Jane) of Falls Church, VA and James M. Stubbs (Fernanda) of Collierville, TN; three grandchildren: Susannah Stubbs of Little Rock, AR, Samuel Stubbs of Falls Church, VA, and Ellie Stubbs of Collierville, TN; an aunt: Jo Nell Stringer of Bay Springs, MS, and a number of cousins. He was preceded in death by his father Nevius Aubrey Stubbs (1969), his mother Mary Ruth Eddins Stubbs (1989), and his wife Mary Ellen Bollweg Stubbs (1999). Jim was a graduate of De La Salle High School in New Orleans, LA (1960), Millsaps College in Jackson, MS (1965) where he was a member of Kappa Sigma fraternity, and Memphis Theological Seminary in Memphis, TN (1973) where he received his Master of Divinity. Jim grew up in Biloxi, MS and New Orleans, LA. While still a student at Millsaps College, he began his ministry in the Methodist church. He would go on to serve as a minister for over 45 years, including 40 years in the Memphis Conference of the United Methodist Church. Jim served many churches during those years, including: St. John’s (1969-70), Piperton (1971-72), Trinity-Paducah, KY (1973-75), Briensburg/Maple Springs (1975-80), Murray First (1980-83), Covenant (1983-90), Frayser Heights (1990-95), Gleason First/New Valley (1995-03), and his final appointment, Mason/Braden (2003-09). He retired at the age of 67 in 2009. Jim also served his country in uniform. He was a chaplain in the Kentucky Army National Guard from 1975-83 and in the Army Reserves from 1983-86. Jim had many interests in life, first and foremost was his family. He was a devoted son. He was a proud father and grandfather. He was a loving husband to Mary and was always by her side as she battled cancer at the end of her life. Besides his great interest in and love for his family, Jim had several other passions in life. He enjoyed reading, cooking, the New Orleans Saints, and his many Collies and Shetland Sheepdogs. However, nothing quite compared to his enthusiasm for gardening. He was known as having an almost miraculous green thumb. Nearly every Methodist parsonage in which he lived over the years was turned into an almost park-like setting. At a later time, there will be a small grave side service for Jim in Bay Springs, MS where his ashes will be interred next to his mother and father. In lieu of flowers, donations can be made in Jim’s honor to De La Salle High School in New Orleans or to the ASPCA. Fond memories or expressions of sympathy may be shared at www.memorialparkonline.com for the Stubbs family.

The family of Rev. Jimmy Eddins Stubbs created this Life Tributes page to make it easy to share your memories.