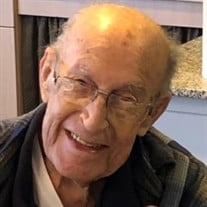 Jesse Watson Spiceland, beloved family man, loved by all, our hero, went into the arms of Jesus on 6-16-2020. He was on this earth for 95 years…. a blessing to so many. Mr. Spiceland was born in Cairo, Illinois on 11-13-1924 to Callie Elizabeth Watson Spiceland and Jesse Spiceland. We miss him profoundly already but will cherish the memory of this remarkable husband, father, grandfather, great-grandfather, friend and mentor. Surviving are his three daughters, Susan Spiceland Livermore (George) of Matthews, NC, Carol Spiceland Warren (Ron) of Germantown, and Kathy Spiceland Andrews Moore (Steve) of Cordova; one son, Dr. J. David Spiceland (Charlene) of Amelia Island, FL; eight grandchildren, Laura Rach (Joe), Amanda Christopher (Lee), Denise Spiceland, Michael Spiceland, Jessica Spiceland, Nikki Andrews, Zach Andrews (Kat), and Shelly Stackhouse (Rick), and numerous great grandchildren. He also leaves his special friend, Evelyn Simkin. Jesse was pre-deceased by his wife Irene (Inky) in 2011, after almost 66 years of marriage. He used “we” constantly, always including Inky in any mention of his many successes in life. He also was pre-deceased by his parents; his three sisters, Ruth Brown, Mary Lois Baldwin, and Edith Simpson; and son-in-law, Rick Andrews. Many, many will remember Jesse for his wisdom and wit, his extraordinary memory of history and geography, his business acumen, his generosity, and his willingness to go out of his way to help, as well as for his Christian ethics. In his last months, he loved to sing to us, favoring, “In the Garden,” “The Old Rugged Cross” and “You Are My Sunshine.” Jesse was a long-time member of Kingsway Christian Church and served during many of those years as church Treasurer, Deacon, Elder and then Elder Emeritus. He served in the Army Air Corps in World War II (“the Big One”), and he flew over 40 missions in a B-24 as a navigator and bombardier. In his zest for encouraging higher education in youth, he also enjoyed telling how, after receiving an honorable discharge as First Lieutenant on a Friday, he resumed his college courses on the following Monday morning! Such was the work ethic he had, even as a 20-year old man, and he demonstrated that principle throughout his life. After completing his undergraduate degree at Southern Illinois University in May 1947, he went on to earn his Master’s in Business at Washington University, St. Louis in June 1948. He later completed additional graduate work, as well as earning his CPA. Mr. Spiceland taught at Marshall, Mo. for a year. A professorship at Memphis State (then Normal Teachers College, now the University of Memphis) brought him to the Memphis area in 1949. He taught scores of future business leaders over a forty-year period. At about the same time, he began managing Maywood Swimming Pool during the summers, and he purchased the business in 1956 from its founder, Maurice Woodson. Maywood remains in the memories of thousands of people as THE place to go for “fun in the sun” at the “beach within reach.” His children and older grandchildren remember it, as well, as the place where they were instilled with their own work ethic and had a unique opportunity to take that with them throughout their own lives. He sold “the pool” in 1987. Mr. Spiceland operated several other business enterprises during the same period, including DeSoto Water Company, Screen Graphics, and various rental properties. Although he was a successful businessman throughout his lifetime, Jesse’s greatest success, along with Irene, was demonstrating to their children and grandchildren what true Christian and family devotion is. Daddy (Papa) truly led by example. We will be forever grateful that God gave us such a Daddy. In lieu of flowers, the family requests that memorials be made to Kingsway Christian Church, 7887 Poplar Ave., Germantown, TN 38118. Due to Covid-19, a small family crypt-side service was held at Memorial Park Funeral Home, followed by a celebration of life at a later date.

The family of Jesse Watson Spiceland created this Life Tributes page to make it easy to share your memories.

Jesse Watson Spiceland, beloved family man, loved by all, our...

Send flowers to the Spiceland family.