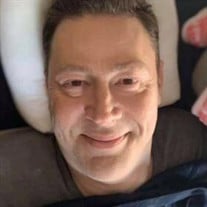 On Wednesday, February 10, 2021, Jerry Winston Summers Jr, beloved son and friend to everyone, passed away at the age of 50 in Memphis, TN. Jerry was born November 02, 1970 in Memphis, TN. He graduated from Evangelical Christian School of Memphis (ECS) and went on to attend Memphis State University (University of Memphis) and Crichton College. Under his lifelong mentor the late Coach Jim Heinz, Jerry was a standout football player for the ECS Eagles and was awarded All-State Football Player in his Senior year. Jerry was the consummate athlete and loved all things sports. He had a personality that was bigger than life itself. His signature grin was infectious and would brighten the day of anyone who gazed upon it. Jerry never met a stranger and he formed friendships that were so deeply bonded, nothing could break them. He was a true testament of love and forgiveness. May his memory serve as an example to everyone. Jerry was preceded in death by his father, Jerry Summers Sr, and his surrogate father Coach Dee Baker. He leaves behind his mother, Maryann Summers Noah, step-father Lee Noah, aunt Marty Rhodes, multiple cousins, caretaker Candace Reed, service dog Stella, non-biological sister Jody Haun, non-biological brothers Dino Tashie, Rand Page, John Ozier, Wes Murphree, Mark Pugh, Byron Phillips, Mike Smith, and Derrick Smith, the entire Heinz family, and countless other friends who Jerry considered family. Jerry's mother, Maryann, would like to express how blessed she was to be chosen by God to be Jerry's mother. Service times will be posted as soon as they are available.

On Wednesday, February 10, 2021, Jerry Winston Summers Jr, beloved son and friend to everyone, passed away at the age of 50 in Memphis, TN. Jerry was born November 02, 1970 in Memphis, TN. He graduated from Evangelical Christian School of... View Obituary & Service Information

The family of Jerry Winston Summers Jr. created this Life Tributes page to make it easy to share your memories.

Send flowers to the Summers family.