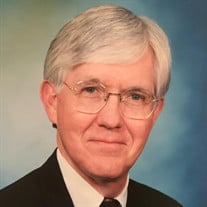 With sadness at his passing but also ongoing joy and gratitude for the gift of his brilliant mind and kind soul, we come to announce that Jerry Edward Mitchell, born August 30, 1942 in Memphis, Tennessee, died on August 26, 2021. He is survived by his wife Caroline; his son Justin (Leslie) Mitchell; his grandchildren Grace, Jack, and Matthis; his sister Ruth Ann Mitchell Koleas, his nieces Karen and Julie, his nephew Mike, and other extended family. He was preceded in death by his parents Leland A. Mitchell and Ruth Brown Mitchell, and his brother Aubrey. Jerry spent his toddler years escaping the playpen and roving through Cooper-Young. He finished Fairview Junior and Central High School, and earned an undergraduate degree from Memphis State University -- despite a Pi Kappa Alpha presidency checkered by antics that may or may not have included a hook-and-ladder fire engine. Political ambition led him to Washington, D.C.: to a law degree from Georgetown University, and to employment in the office of Senator Albert Gore, Sr., where he met Caroline. Drafted on his 28th birthday, he completed basic training, despite further antics that may or may not have included procuring fifty roast-beef pogey-bait sandwiches, wrapped as laundry, for his fellow soldiers. He then went on to Officer's Candidate School, served the JAG Corps with distinction as a Lieutenant in Vietnam, received an honorable discharge, and returned to Memphis in 1971 to practice law, raise his family, and serve his community. Soon thereafter, John Thomason, Frank Crawford, and Roy Hendrix invited Jerry to join recent recruits Al Harvey and Kim Johnson, as part of a fledgling firm that they were incubating. Together, these six gentlemen forged one of the finest law firms in the state: a legacy that endures, as Lewis Thomason. His professional successes are too numerous to mention. His contributions to his friends, family, and community are deep, personal, subtle, and lasting. His warmth and humor are without equal. His family is grateful for and humbled by the tremendous outpouring of encouragement, prayers, and love. Messages of condolence may be emailed to [email protected] In lieu of flowers, the family has asked that donations be made to Autism Speaks, The Arc Mid-South, the University of Memphis, and Germantown Performing Arts Center. Following private burial, a memorial service will be held beginning at 2 PM on Friday, September 3, 2021, in the South Hall, Hope Church, 8500 Walnut Grove Road, Cordova, TN. All are invited to attend. For those who are unable to do so, the service will be livestreamed. Please contact the family at [email protected] for details about the livestream, as well as about a forthcoming secular celebration in Jerry's honor.

With sadness at his passing but also ongoing joy and gratitude for the gift of his brilliant mind and kind soul, we come to announce that Jerry Edward Mitchell, born August 30, 1942 in Memphis, Tennessee, died on August 26, 2021. He is survived... View Obituary & Service Information

With sadness at his passing but also ongoing joy and gratitude...