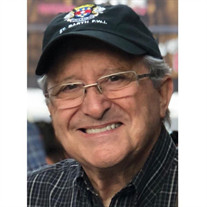 Memphian Dr. Jerry Lloyd Johnston, 83, a servant of Christ, went to his heavenly home on Feb. 3, 2021. Dr. Johnston was born in Monette, Ark. on November 19, 1937 to Cynthia Alena Johnston and James Albert Johnston. He attended Arkansas State University and earned his dental and pediatric dental degrees from the University of Tennessee College of Dentistry. Between earning his dental and pedodontic degrees, Johnston served as a captain in the U.S. Army stationed in LaRochelle, France where he met his future wife Joan, whose father was also stationed there. The couple settled in Memphis and had three children. Dr. Johnston founded Pediatric Dental Group in Whitehaven in 1968 which expanded to two practices in both East Memphis and Southaven, Miss. where he treated multiple generations of patients. He was also on staff at LeBonheur Children's Medical Center. An active member of First Evangelical Church, Johnston served as a longtime elder and head of the missions board and in foreign missions for decades. His heart for missions was evident even as a young dentist when he worked for a year for the state of Kentucky traveling in a mobile unit in Appalachia doing dental work in rural communities. Johnston made many trips with his family to Belize to run dental clinics and has traveled to Austria, India, Singapore, Nepal, and the former East Germany providing dental care and supporting local pastors. He has led multiple Bible studies at church and with friends and neighbors. His guiding light in life was Christ's charge in Matthew 28:19-20 "Therefore go and make disciples of all nations, baptizing them in the name of the Father and of the Son and of the Holy Spirit, and teaching them to obey everything I have commanded you. And surely I am with you always, to the very end of the age." His gentleness, kindness and love for the Lord touched the lives of countless people and will continue to be his legacy. Johnston is survived by his loving wife of 56 years, Joan Tibbs Johnston; his sons, Jerry Kirk Johnston and wife Karen Grupp Johnston, and James Kevin Johnston and wife Amy Rhodes Johnston, all of Memphis; a daughter, Julie Johnston Litfin and husband Matthew Allen Litfin of Wheaton, Ill.; nine grandchildren: Kate Johnston, Allie Johnston, Fraser Johnston, Ethan Johnston, Ross Johnston, Luke Johnston, Sally Litfin, Lauren Litfin and Audrey Litfin; a brother, James Dennis Johnston and wife Sheila Davidson Johnston of Paducah, Ky. and a niece, Kathryn Denise Johnston Jennings and husband Craig Lee Jennings and their three children of Hernando, Miss., along with extended family, many friends and generations of former patients. Funeral services will be held at First Evangelical Christian Church on Sunday, February 7 at 2 p.m. with Pastor Cole Huffman and Pastor Ronnie Stevens officiating. There will be seating for 250 people and the service will also be live-streamed at firstevan.org/funeral. In lieu of flowers the family asks that expressions of sympathy take the form of contributions to [email protected]