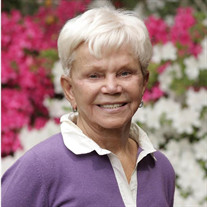 Janina Stella Turbeville, age 92, passed peacefully from this life on July 15, 2021 at her home, lovingly surrounded by her family. She is survived by her husband of 73 years, William Otis ‘Bill’; son, Michael Ray ‘Mike’; daughter, Janina Tiner (David); godson, Gary Smallwood. She was ‘Mimi’ to her grandchildren: Sarah Kate Anderson (Craig), JD (Tessa), and Anna (Alex Levy), and her great-grandchildren, Rafe, Clementine, and Theo Anderson. She was ‘Nina’ to her Polish / Belarusian family. Family members from Poland / Belarus who have gone before her from this life include her parents, Joseph and Olga Missiyuk, and siblings, Anna, Luba, Peter, and Yasha. The family would like to express appreciation to her caregivers, Sandy, Melissa, Marilyn, Sonya, Tasheka, Ursula, Irma, Carmen, Charro, Domingo, and Bernardino. Visitation will begin at 1:30 p.m. with a memorial service at 2:30 p.m. on Friday, July 23, 2021 at Memorial Park, 5668 Poplar Avenue, Memphis, TN 38119. Following the service there will be an entombment ceremony at the family crypt. Janina was born in the little village of Perki, Poland on December 1, 1928. She often shared fond remembrances of the storks, lilacs, and wildflowers adorning her homeland. Janina faced with grit and a tenacious faith the many difficult challenges in her young life, including being separated from her family at the tender age of 11 and surviving the Holocaust during WWll. Janina met her ‘Bill-O’ after the war ended and she was residing in a displaced person camp and working at an Allied Forces Officer’s Club when she conveniently ‘lost’ his coat as the attendant on duty one evening. Janina was always so proud of attaining her naturalized American citizenship. Despite her lack of formal education due to life circumstances of the war, Janina was fluent in multiple languages, including Polish, Russian, German, English and some Spanish. She delighted so many with her cooking and baking, especially her signature cheesecake, angel food cake garbed with freshly whipped cream and fresh strawberries, and her chocolate satin pie. She was a gardener extraordinaire, her garden plush with magnificent azaleas, crepe myrtles and flowers of every sort. Janina was ahead of her time in the realm of exercising for health with a lifetime membership at the French Riviera Spa beginning in the early 70’s. Janina possessed a great capacity for love, acceptance, inclusion, and generosity with a particular heart for those in need. Janina was perhaps at her happiest when staying at her beloved Villa la Joya in Mexico. Janina enjoyed a life rich with travel to places far and wide, including the Great Wall in China, the Taj Mahal in India, Iguazo Falls in Brazil, the Bolshoi Ballet in Moscow, Europe, Russia and the UK. She attended a mass conducted by Pope Benedict XVI at Saint Peter’s Basilica at the Vatican in Rome. One of the most significant trips of her life was a 2011 return to her place of birth in what was once Poland and now is in Belarus. There ‘Nina’ was reunited with her surviving family members, attending a large banquet held to honor her return home. An especially touching experience was Nina’s visit to the gravesite of her long-lost, beloved mother. Throughout all the highs and lows of life, Janina was unwavering in her faith and crediting God with His protection of and provision for her. To view her service online click the line below. http://webcast.funeralvue.com/events/viewer/57434/hash:155012563FE05E2D

The family of Janina Stella Turbeville created this Life Tributes page to make it easy to share your memories.

Send flowers to the Turbeville family.