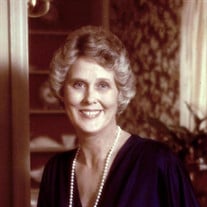 Janet Alford Huettel, died peacefully Tuesday, August 24th after a brief illness, surrounded by family. Born on October 18th, 1934, in Cairo, Illinois, her family moved to Memphis when she was a little girl. Janet attended Immaculate Conception for grammar school and St. Agnes Academy for high school where she was elected the prettiest girl by her classmates and was also the first graduate at the Walnut Grove Road location. In 2001, she was inducted into the Saint Agnes Hall of Fame. A talented artist, Janet then attended Texas State College for Women and graduated from Memphis Academy of Arts. Janet married her high school sweetheart, the love of her heart , William Le Prince Huettel. The two shared a passion for art, traveling, antiques, grand opera, and one another. Janet "Mimi" was a devoted wife, mother, grandmother and great grandmother. Janet was employed by the US Corps of Engineers in the mapping department and later taught art to young students at Memphis Art Academy and St. Agnes Academy . She was an active member of The Madonna Circle, The Memphis Opera Guild, and the Women's Exchange. Janet was an active and devoted communicant of Saint Peter Catholic Church. Janet was also a successful business woman, having owned both a stationery business and an antique shop, " A Pastime Antiques". During her time at the antique shop multiple celebrities stopped by. Her favorites were actors Bill Paxton and Nicole Kidman. Janet is preceded in death by her parents, Harold and Martha Alford, her daughter, Whitley Huettel Mitchell, her sister, Virginia Ann Alford Robinson and her sons in law, Charley Snyder and Eric Mitchell. Janet leaves her beloved husband of 64 years, William Le Prince Huettel; daughters, Laurie Snyder and Cathryn (John) Gay; son Bill Jr. (Bobo) Huettel; grandchildren Will (Rachel) Snyder, Trey Huettel, Elise Gay, Stuart Huettel, Anna Cathryn Gay, and Nate Huettel; and great-grandson, River Huettel. The family would like to thank Senior Care and the exceptional care given to our mother from Carolyn Boswell and Michelle Lewis. We know she is enjoying an everlasting paradise where one day we will join her.

The family of Janet Alford Huettel created this Life Tributes page to make it easy to share your memories.

Send flowers to the Huettel family.