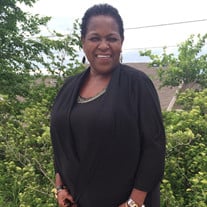 Ms. Janet Lorraine Dickson, was born to Arlee Delores Shannon and Congress Dickson Sr., on January 10, 1956 in Crittenden County, Arkansas 9 miles from Memphis, Tennessee, at the cusp of Jim Crow and the Civil Rights era. Janet was called to join the divine realm on March 24, 2022 at 3:24 pm in Tulsa, Oklahoma. She is preceded to eternal liberation by her mother, father and companion-Viet Nam Vet Service Member Raymond Kelly. Janet was blessed to witness a full life of 66 years here on earth with many of us and her dear loved ones. She brought to the world three remarkable children; two daughters (Fallon Laine, age 40) (RaShanna, age 36 ) and one son, (Melvin Charles “Chuck” Jr. age 38). She shares one grandson, Braylon Dean Gilliam-Dickson (age 5) with Chuck's father, the late Melvin Charles Poole Sr. Janet's early years formed in Memphis during the civil rights era. Where she learned about activism and community involvement. She was 12 years old when Dr. Martin Luther King Jr., came to Memphis to fight for the sanitation workers rights. During this time, Dr. King was speaking at the neighborhood church up the street church, where she walked down to sit on the church's porch steps to hear him speak. In college she took up nursing but was so passionate about politics and civil rights. Her and friends often traveled to East Tennessee to hear the likes of Dick Gregory, Jesse Jackson and to attend Nation of Islam meetings. In Janet's mid-twenties she began to have children. Due to the crime and poverty in Memphis, and in search of a better life for her children she relocated to Tulsa, Oklahoma. Though she was intending to move to the progressive and prosperous Denver, CO but was influenced to relocate to Tulsa by her brother- in-law, Oscar Howard in 1989. Janet's new life and career took off in Tulsa at the Save Our Babies foundation and she went on to pursue other endeavors within sales and management where she co-owned a boutique furniture store up until 1995. From 1996, she worked as a Supervisor/Program Coordinator/Habilitation Training Specialist for the Association for Direct Care Trainers. Janet worked alongside her sister, Susan L. Howard, who started the business in 1995 to expand health care and quality of life for people with disabilities. Janet attracted many new clients and helped Susan build a successful multimillion dollar company from the ground up. Janet has been recognized throughout the state of Oklahoma for advocating for people with developmental and intellectual disabilities. Janet was semi-retired from Association for Direct Care Trainers, Inc at the time of transition. In the last five years Janet has been an in-home caregiver for her godson Norvell Lee Holloway who has intellectual and developmental disabilities. Janet has a strong work ethic, unparalleled leadership qualities, compassion for people, socio-economic issues, racial equality, criminal justice reform and has lived a life of service. Janet is in hope that her children and or children's children will receive atonement and compensation benefits from the United States of America due to their involvement in the transatlantic slave trade. Which brought about many atrocities to her ancestors captivated from Africa to indigenous North American soil. In Janet’s leisure time she enjoyed interior design, home renovations projects, cooking, grilling, gardening, R&B/blues music festivals, traveling, live horse and dog gaming sports. In fact, she named her youngest daughter, RaShanna after an Arabian champion race horse. No matter the leisure or occasion she enjoyed spending quality time with her dear friends, children and grandson. A loving mother, grandmother, sister, companion and loyal friend, Janet will truly be missed. She has entrusted her legacy to her three children (eldest to youngest) Fallon, Chuck and RaShanna. To cherish her fond memories, she leaves behind a wealth of knowledge, an invaluable book collection, furniture, African and cultural art to her children and so much more. Janet affectionately loved all of her 10 surviving siblings: Joan Y. Dickson-Williams, Congress Dickson Jr, Rhonda Ratliff-Rowan, Susan L. Gatewood-Howard, Trina K. Gatewood-Wadley, Racine Dickson, Richard Dickson, Michael Dickson, Conrad Dickson, Destiny Sage Dickson and a host of nieces, nephews and cousins.

Ms. Janet Lorraine Dickson, was born to Arlee Delores Shannon and Congress Dickson Sr., on January 10, 1956 in Crittenden County, Arkansas 9 miles from Memphis, Tennessee, at the cusp of Jim Crow and the Civil Rights era. Janet was called to... View Obituary & Service Information

The family of Janet Lorraine Dickson created this Life Tributes page to make it easy to share your memories.

Send flowers to the Dickson family.