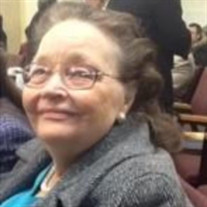 Jane Griggs Hansard fell asleep in death on Monday evening October 5, 2020. She was 92 years of age. Jane was preceded in death by her husband of 64 years, the late Cecil William Hugo Hansard, a son, Rickey Hansard and three brothers, Paul Eugene Griggs, Thomas Howard Hopper Lee Griggs and her fraternal twin, Jerry Griggs. She is survived by ten children, Cecil Ronnie Gene Hansard (Jana), Tommy Russ Hansard (Charlotte), Mary Lee Hansard Mathews (Jim), Jerry Dwight Hansard, Patty Ann Hansard Cyphers (David), Vickey Hansard, Kennith Joe Hansard, Alice Kay Hansard, Linda Jane Hansard, Laurie Lynn Hansard Brown (Keith), a sister, Freida Bernice Griggs Scheel, as well as nine grandchildren and a host of cousins, nieces, nephews and friends. Born on January 27, 1928 to Jake and Jessie Lee Griggs in Parkin, Arkansas, Jane recognized her love of truth as a little girl. She would always listen closely, as her mother would tell her how God was always watching, so always behave and always tell the truth. As Jane continued to grow, so did her desire for truthful answers to sincere questions about God, life and death. In 1946, Jane married Cecil and as their family grew so did her quest for the truth. In her search for answers, she attended church after church, looking for the truth; she couldn’t find it. Then one day, it came to her. She got a knock at the door and it was one of Jehovah’s Witnesses. The witness used the truth of God’s Word, to answer her questions, as a result, she began to study the Bible, in order to gain an accurate knowledge of God’s Word. In May 1965, Jane symbolized her dedication to her God, Jehovah. For the past 55 years, Sister Hansard helped many others, starting with her husband and children, to understand what it means to love Bible truth. She taught so many individuals how to ponder on Scriptural passages, to embrace and cherish them. And more importantly, by her example, she showed us how to live by them. Jane filled the lives of her family and friends with love and the joy of Jehovah. Although deeply saddened by our loss, we rejoice in Sister Hansard’s loyal service for over many decades. The family will receive guests on Sunday, October 11 from 4 until 6 At Memorial Park Funeral Home 5668 poplar Ave, Memphis, TN, 38119.

The family of Jane Hansard created this Life Tributes page to make it easy to share your memories.

Send flowers to the Hansard family.