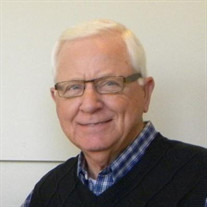 James Roy Taylor of Germantown, TN went to be with his Lord on March 26, 2021. He is survived by his wife Carolyn Clark Taylor, his sons Craig Taylor (Jennie) and Chris Taylor (Melissa), his grandchildren Kelsey, Hannah, Drew & Josh, his sisters Edith Nunnelee (Jim), Kay Bridges, Bep Pollan, Jane Bratton, Joyce England and Norma Morgan, and his cousin Fred Spain (Joy). He was preceded in death by his father Bluford Lafayette Taylor and his mother Vivian Spain Taylor. Known to everyone as Roy, he was born on August 5, 1941 in Grenada, MS. He graduated from John Rundle High School in Grenada where he met and later married Carolyn Clark to whom he was married 59 ½ years. He later graduated from Delta State University with a bachelor’s degree in Accounting. While in college, he entered Officer’s Candidate School with the United States Marine Corps as a Lance Corporal and later went into the Marine Reserves. Roy was a CPA with Ernst & Ernst in the Memphis office. Ernst & Ernst became Ernst & Whinney and then ultimately Ernst & Young. After Ernst & Young he moved to Beaumont, Texas and was the Executive Director at Beaumont Eye Associates. From there he moved to Laurel, Mississippi to work at Sanderson Farms. He later moved back to Memphis and was the President at Boyle Trust & Investment Company until his retirement. Roy was an avid golfer, a member of Windyke Country Club beginning in 1976. He served on the Board of Directors and was President at one point during his tenure. He was a member of Bellevue Baptist Church where he enjoyed his time in his Men’s Life Group. Services will be held on Thursday, April 1st in Pollard Chapel at Bellevue Baptist Church in Cordova, Tennessee. Visitation will be at 1:00 pm followed by the funeral service at 2:00 pm and burial at Memorial Park Funeral Home & Cemetery in Memphis, TN. In lieu of flowers, the family requests gifts to the American Diabetes Association, the American Heart Association, or the charity of your choice.

James Roy Taylor of Germantown, TN went to be with his Lord on March 26, 2021. He is survived by his wife Carolyn Clark Taylor, his sons Craig Taylor (Jennie) and Chris Taylor (Melissa), his grandchildren Kelsey, Hannah, Drew & Josh, his sisters... View Obituary & Service Information

The family of James Roy Taylor created this Life Tributes page to make it easy to share your memories.

James Roy Taylor of Germantown, TN went to be with his Lord on...

Send flowers to the Taylor family.